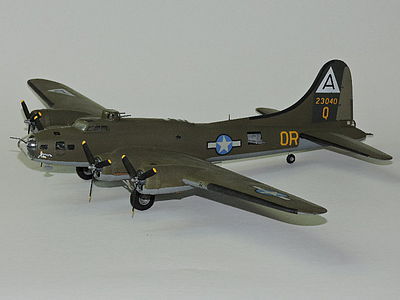 "Ahh, the legendary Memphis Belle"
apbar100
Superb interior details. Nice construction and fit; fully engraved panel lines and rivets; you can manually operate the ball-turret; great features; maybe one of the best B-17 in the market today. I haven't built mine yet -saving the best for last :) The kit doesn't include pilot figures but if you're interested, they're available from another brand - a crew set of 10 figures (pilots, engineers and gunners) designed for B-17 1/72 models. I wish Hobbylinc would carry the product. I watched/read the Memphis Belle story and fell in love with this piece of WW2 machine.

#107 in Plastic Model Airplanes 1/70-1/79 Scale
#273 in Plastic Model Airplanes
#1,846 in Plastic Models
"Beautiful Belle"
cclem8441 (Savannah, Ga)
I have built this kit 3 times in my life. It always reminds me of time with my father, this was the first skill level 2 model I ever built, it was crushed by the family cat 8 months later. Its a great easy built. Great detail, easy to follow instruction and very descriptive, that should make this fun for anyone at the beginner level. Everything matches up beautifully and falls right together.
"Huge"
beaubowden6 (Troy Ohio)
This model is very large and will take up the space of almost any shelf.(I have decided to hang mine). The quality of the model is decent, nothing special. The fuselage didnâ€™t fit together well at all and I had to spend quit a bit of time trying to cover up the cracks. This model looks great when finished.
"very nice kit, good detail"
rarem37
This kit has very nice detail and is a wonderful platform for using after market decals.

The B-17 Flying Fortress "Memphis Belle" was the most famous bomber, because she was the first heavy bomber in Hitler's European war theater to complete 25 combat missions and keep her entire crew alive. The Memphis Belle was named for pilot Capt. Robert K. Morgan's wartime sweetheart, Ms. Margaret Polk. The preserved Memphis Belle remains on display at Mud Island in Memphis, Tennessee.