Keep calm ... Hobby on. Please be patient during this time. We are open, but orders may be delayed unexpectedly.
> Plastic Models > Airplanes > Model Helicopter : Academy HUGHES 500D POLICE COPTER acy12249

This is a 1/48 Plastic Hughes 500D Police Helicopter from Academy Plastics. It's for ages 10 and up.

One of the most nimble helicopters in service today is the Hughes Model 500. This machine is a development of the U.S. Army's OH-6A Cayuse which proved so valuable as an observation and attack helicopter in the vietnam war. The Model 500 is modified with a "T" type tail and a five-blade rotor for more quiet operation. The spritely defender can be adapted to handle almost any task. 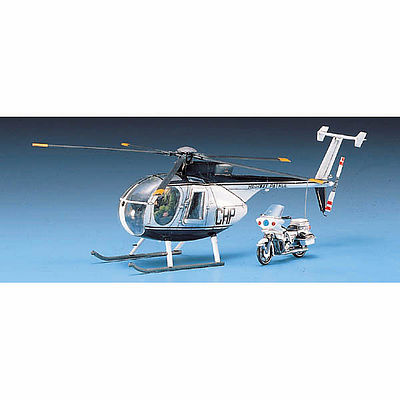 "Hughes 500 All Purpose Helicopter"
JRB (Burleson, Texas)
This little model (even though 1/48th scale) is really true to size. In the real world they aren't much bigger than 2 crew but they are amazing machines. This kit was very easy to build even though not overly detailed. But then again it was only 11.00 . I built both the Police version as well as the Israeli Army Scout version at the same time. I had a blast with these with the only drawback being in the painting of the white plastic of the police version. It would have been nice to use the white cast but it had conflicts with the interior and windows. I ended up painting the white to get a more uniform color. These 2 were fun and quick to build. The crew was the toughest part to paint. I would recommend these to anyone who likes this little multi purpose Helicopter. Very much worth the cost.

#10 in Plastic Model Helicopters
#162 in Plastic Model Airplanes
#1,474 in Plastic Models
"Nice"
calaron (Salol, MN)
Any model where you get to build a helicopter And a motorcycle has got to be a good kit. and the price was right.
"Not a great model."
jbcapra
Not very well detailed model, looks like the it will be easy to assemble, definitely more for a beginner. But the price makes it acceptable. :)
"fun build"
Remington1858 (Colorado)
Fun little build. i personally found the decals not great quality. Motorcycle will test your steadiness painting. had a little issue with one of the doors.easily taken care of.