This is a plastic 1/72 P-51D Mustang USAAF & USAF Airplane from Academy Plastics. It's for experienced modelers.

The D model Mustang with the bubble canopy is by far the most famous version of this U.S. fighter aircraft. Powered by a Rolls-Royce Merlin V-12 engine the aircraft was unrivalled as a bomber escort. 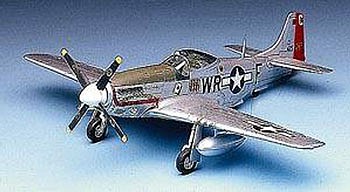 "My First 1/72 or Larger Scale Aircraft Model in Thirty Years"
bkr8396
The group of four photos of the Mustang on this website is my first 1/72 or larger scale model aircraft I completed in thirty years. I wanted to try to get back into model aircraft building; and when I saw this kit at Hobby Lobby at a greatly reduced price of $4.50, I thought it couldn't hurt to give it a try with this one. PROS: - Instructions generally were easy to understand. - Parts were cleanly made, with no flash. - Parts, possibly except the really tiny or narrow ones, were easy to cleanly cut off the sprues (sp?) - gotta be REALLY careful with those tiny or narrow parts though. - With the exception of the upper to the lower wing sections, the parts fit together cleanly. - The wing flaps could be placed in level position or lowered position. I successfully inserted them in level position. - Fairly easy to paint with enamel paint and brush. - Decals were easy to place onto the aircraft. - I am no aircraft expert, but the level of detail on the aircraft - on the outside at least - appears to be quite nice considering the 1/72 scale. CONS: - Those tiny or narrow parts were easy to break if not cut off from the sprues with appropriate care... and easy to lose also... had a couple close calls... - Perhaps this was due to my inexperience; but I was not able to fit the upper wing sections to the lower wing piece properly. Length from forward edge to trailing edge was longer at the wing root for the upper wing sections than for the lower piece. - Although, as I mentioned earlier, I found the decals easy to place onto the aircraft; having them STAY on the aircraft afterwards was a bit challenging. I found decal set solution to not be of much help. After multiple unsuccessful attempts, I gave up on trying to get the control panel decal to stay on the corresponding plastic part; but fortunately with the panel so far inside the cockpit, it essentially became irrelevant. - My biggest pet peeve with this model, the paint scheme for the nose. Anti-glare panel and propeller spinner aside, the pictures on the kit box appeared to indicate the nose was essentially all silver. The kit instructions appeared to imply that the bottom third of the nose should be white. Based on live pics of the aircraft seen via Google, I determined the white option to be correct; but it sure made things a bit more challenging - establishing the boundary between the white and the silver... and trying to get the red stripe decals to properly line up on it. A more experienced modeler probably could have successfully addressed this. I was close but not entirely successful. FINAL THOUGHT: - I have heard and read that one should read and study a model kit's instructions in their entirety before commencing the actual building of the model, as this could save the modeler from potential headaches during assembly. For this kit, I believe that assessment to be quite correct. OVERALL ASSESSMENT: - As the HobbyLinc website mentioned, this kit would be appropriate for more experienced modelers. Not recommended as a first aircraft model kit. In hindsite I probably should have worked on one or two simpler kits before giving this one a go. I gave this kit a GOOD as opposed to EXCELLENT due to issues with the wings and difficulty with successfully addressing the paint scheme issue for the nose. I'll give the decal issue and the small/narrow parts issue the benefit of the doubt, and assume that it could be a result of my inexperience.