This is the 1/35 Scale Sherman M4A4 75mm Tank Plastic Model Kit for Cyber-Hobby from Dragon®. Suitable for Ages 14 & Up. 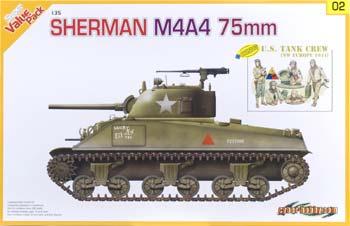 "Good value and good kit, although kind of a weird selection of figures and decals"
saerdo
This kit went together without any issues whatsoever. I decided from the get go that I was going to make this a British Sherman and not as the kit suggested an American Sherman in Burma. The M4A4 was used primarily by the Commonwealth so why Dragon/Cyberhobby went with this decal choice is beyond me. The figures with the kit are suited for Europe, not for the Pacific so I am saving them for later. I added a stowage box for the turret from Ultracast, and used the Firefly stowage box attached to the rear of the hull. I used aftermarket decals and went with AFV club T49 tracks instead of the T48 tracks that came with the kit. Those tracks were about two or three links too long. One of the downside is the sand skirt mounts, they have a mold line down them and have bolts that stick out instead holes. The directions can be a little confusing at times but Dragon is known for that. There are plenty of items for the spares box and that's always a plus. Good value, good kit for the price.