This is the 1/72 Scale AH-1 Super Cobra Plastic Model Helicopter Kit from Italeri. Suitable for Ages 14 & Up. 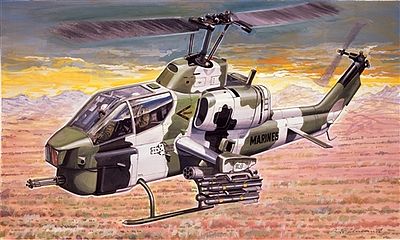 "1/72 scale cobra"
Obsydian
it is a good quality model that give you options on parts to use for armaments. would be better if it came with pilot figures though. it also suits the sky grey camo that the us Air-Force use.

During the Vietnam War, it quickly became apparent that troop carrying helicopters required some kind of armed escort. The AH-1 Cobra was intended to be a stopgap measure to meet this need while a new aircraft could be designed. As a result, the AH-1 had many parts in common with the UH-1 Huey. However, the Cobra was such a success that it is still in use today and the proposed replacement, the AH-56 Commanche, was canceled. The AH-1W is a navalized twin engine version of the Cobra and is used exclusively by the U.S. Marine Corps for close air support of ground troops.