This is the 1/72 Scale P51D Mustang Aircraft Plastic Model Airplane Kit by Italeri. Suitable for Ages 14 & Up. 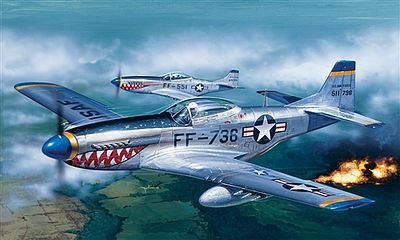 The Mustang is one of the world's best known airplanes and was without doubt the best fighter plane of World War II. It was built in record time in 1943 for the European campaign and was well suited to fight the BF-109s and FW-190s of the German Luftwaffe. It was subsequently used against the Japanese Forces in the Pacific theater. Very maneuverable and of noteworthy range it also proved to be an effective ground attack fighter, even though the inline liquid-cooled engine was vulnerable against enemy light arms. During the Korean War, despite the new jet fighters, it was extensivel used for troop support missions. In some instances it was also used to interrupt enemy supply lines. It effectively fought North Korean and Chinese MIG-15 jets.