A blockade runner is usually a lighter-weight ship used for evading a naval blockade of a port or strait, as opposed to confronting the blockaders to break the blockade. Very often blockade running is done in order to transport cargo, for example to bring food or arms to a blockaded city. In other cases the blockade runners would carry mail in an attempt to communicate with the outside world. 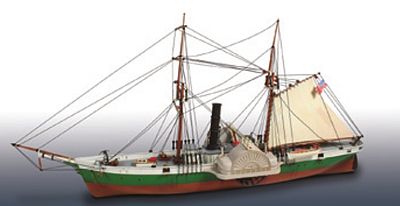 "Can't decide, Sail or Steam power? This one got you covered!!"
Bob A. (Dunmore Pa.)
Another Great re-issue of an old long OOP(out of production) kit! Of great Historical interest, this ship had a long life, surprisingly, sailing under 4 different flags including enemy control during the American Civil War. A detailed history is included on the box flap art, and describes it. Assembly was very good w/ very little flash to clean, apparently the molds were either re-tooled or just not used extensively over the years. The tricky assemblies were the paddle wheels, as you have to make sure you assemble a Rt. & a Left side with the boards on the correct sides for direction. Test fitting the parts before assembly is highly recommended to familarize yourself with the glue points and assembly. Pre-painting the parts is also recommended before assembly as many of them are small and not accessable once built. I didn't like the rigging blocks supplied w/the kit , so I used some left over from a Revell kit as These seemed more to scale, and didn't look as Boxey as the ones Supplied. (Hmmmm, Gonna' hafta' e-mail round2 'bout that.....) I built mine as the USS Harriet Lane, and painted it as on box art. Rigging was a little tricky, but straight forward as long as you don't pull each line too tight as you progress . If you do, sometimes you can correct it a little on the opposite Side / Line. Detail Note* Bulbous guns (3) are Dalgren cannon and should be painted Black as these were Iron ,not Brass so ,not Gold as called for in the instructions. I also added a few left over crewmen from another kit ,as guncrew, and observers. Overall a nice kit for the experienced and definitly for the Senior modelers looking for something different or Historically accurate.

#5 in Plastic Model Military Ships
#5 in Plastic Model Ships
#169 in Plastic Models
"Great Model"
pamellakirkpatrick1
Impressive model, so authenic that US Coast Guard included it in their museum!
"Fun For Intermediate Ship Builder"
parisfrisby (Prescott Valley, AZ)
This kit will be a fun challenge for the intermediate ship builder. If you haven't built a ship with rigging before try something simple first like the Viking Sailing Ship 1/50 Scale -- #05403 from Revell Germany. That will introduce you to rigging. The parts are clean and you have only a little flash to deal with. The only real trouble your gonna have is with the instructions. They are vague in places and the rigging instructions could have been better. I think that causes this kit to take a little more time to build than usual. The paint scheme they provide is sparse in detail. I recommend doing some online searching but if you just go by the picture you'll still have a nice model. Its the perfect scale not to big not too small so displaying it wont be a problem. For the price you can't go wrong.
"Nice finished product, but not what i expected"
Dshannon1863 (Newark, DE)
The model overall was fun to put together, however, some of the pieces did not fit as they should of even after I sanded them and removed excess plastic. The bow mast was shorter then it should have been. Also the directions were less then perfect, there were missed steps in the instructions and I had to go back and complete steps in previous sections.