Keep calm ... Hobby on. Please be patient during this time. We are open, but orders may be delayed unexpectedly.
> Plastic Models > Ships > Sailing Ships : Lindberg Jolly Roger Pirate Boat lnd70874

The Jolly Roger is any of various flags flown to identify a ship's crew as pirates that were about to attack. The flag most commonly identified as the Jolly Roger today is the skull and crossbones (although swords are also common), a flag consisting of a human skull above two long bones (probably tibias) set in an x-mark arrangement, most usually depicted crossing each other directly under the skull, on a black field. This design was used by several pirates, including Captains "Black Sam" Bellamy, Edward England, and John Taylor. Some Jolly Roger flags also include an hourglass, another common symbol representing death in 17th- and 18th-century Europe. Despite the prominence of flags with art in popular culture, plain black flags with no art were often employed by most pirates in the 17th㥾th century. Historically, the flag was flown to frighten pirates' victims into surrendering without a fight, since it conveyed the message that the attackers were outlaws who would not consider themselves bound by the usual rules of engagement&#148and might, therefore, slaughter those they defeated (since captured pirates were usually hanged, they did not have much to gain by asking quarter if defeated). The same message was sometimes conveyed by a red flag, as discussed below.

Since the decline of piracy, various military units have used the Jolly Roger, usually in skull-and-crossbones design, as a unit identification insignia or a victory flag to ascribe to themselves the proverbial ferocity and toughness of pirates. In a non-naval context the skull and crossbones motif has additional meanings, for example, to signify a hazard such as poison. 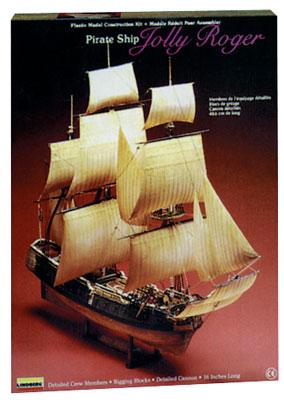 "Instructions need work"
ichibandot
Not a bad model to build but you need to interpret whete some of the pieces should be placed on the bow in particular. Photos are grainy and lack detail. Pieces that need to be painted arent all labeled. Rigging instructions are not instructions but a diagram lacking detail. Pieces dont fit together well.

#5 in Plastic Model Sailing Ships
#58 in Plastic Model Ships
#1,340 in Plastic Models
"Jolly Roger"
Alan Boling (Honea Path, SC)
I build the kit to the La Flore Americana....very similar to the ship that came. a great starter for sailships....i used real cloth instead of the plastic and it turned out great.
"Fun to build"
tommyearl
Lots of parts. Fun to build. Some of the photos in the instruction manual are lacking in detail. They used actual photos, rather than diagrams. Still fun to build. Not for the beginner.
"great model"
vickersjon1941
great model looks very good went put together but a little hard for a beginner which I am just starting out with models but it took me about two days to get it done and looks great. and the nameplate I painted black with white letters as for the ship I left the bottom of the hull unpainted in its dark brown color but I painted blue/green stripe along the side. top of the of the hull I painted black with gold railing