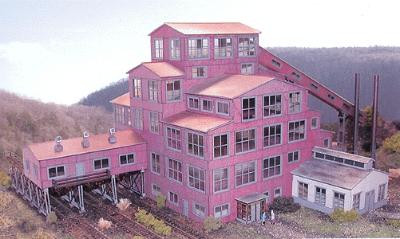 The prototypes that inspired this kit were located in the anthracite coal region of Northeastern Pennsylvania. In these immense structures know as "breakers" or "collieries," anthracite was washed & broken into sizes usable for home heating & industrial processes. Breakers of the size and type represented by this kit were typically built in the 1930s to consolidate several smaller, older processing plants and many were still operational into the 1970s. At their peak, there were hundreds in operation and the several thousand employees that worked in them could process as much as 12,500 tons of coal in a single day. Coal was brought to the breakers for processing from the surrounding mines via extensive railroad lines and conveyors that could literally stretch for miles.