Keep calm ... Hobby on. Please be patient during this time. We are open, but orders may be delayed unexpectedly.
> Plastic Models > Airplanes > 1/40-1/49 Scale : Tamiya Bristol Beaufighter TF.Mk.X Fighter Aircraft tam61067

This is a plastic model kit of a 1/48 Scale #67 Bristol Beaufighter TF.Mk.X Kit from Tamiya. Recommended for ages 10 and up. 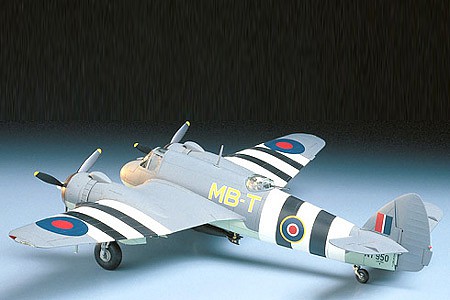 "good tamiya lit, as usual"
jctoymaker
Not a lot to say about the kit that is special, but it is a very good build, period. All the parts, large and small, fit together beautifully, with an extra attention to the landing gear which brings the model a step further; the detail, fit and finish there are superb. The only mild disappointment in the kit is what usually is lacking inn Tamiya kits, and that is engine detail. Their kits have almost none in general; ddd for good a producer of models. Otherwise, a good build.

#247 in Plastic Model Airplanes 1/40-1/49 Scale
#763 in Plastic Model Airplanes
#3,529 in Plastic Models
"Bristol Bo"
JRB (Burleson, Texas)
Model was all of what everyone has said it was. Excellently made and with precision fitted pieces. More engine detail (as the landing gear) would be nice but that depends on the time spent painting. Only thing that upset me and not indicative of Tamya was they left out the composite cups for hold ons for the props. Oh well, I made do with a couple I made out of old pencil erasers. I loved the paint schemes of the old school Brits. Just a little tricky to produce. This is a nice plane and well worth the cost and effort
"Bristol Beaufighter"
TBSIGOF
Tamiya's Beaufighter is a fairly good sized model. With a lot of detail. Just what you expect from Tamiya. The kit has great fit, no flash and superb decals. You may want to have some experience to build this one.
"Another Tamiya Masterpiece"
BlucherFamily (Overland Park, KS)
This kit really exemplifies Tamiya's quality and detail. A really great kit that builds well, with no fit issues, and minimal cleanup of parts that come cleanly of their sprues. The Beaufighter was one of the iconic British aircraft of WWII and this kit does it justice, producing an amazing representation.

Making use of its sturdy construction and ample weaponry, the RAF's multipurpose Bristol Beaufighter fulfilled a wide variety of duties throughout World War II. At first, these planes showed their effectiveness as night interceptors, until that duty was passed on to the faster Mosquito. The Beaufighter's main role became ground attack and anti-shipping strike.

The next generation of the Beau, the TF.Mk.X, used a 1770hp Hercules XVI engine and heightened anti-ship attack capabilities. Its deadly arsenal consisted on one eighteen-inch torpedo or two 500 lbs bombs, plus eight rocket projectiles. The nose of the plane housed a special navigation system as well as an Al Mk.8 radar for surface and submarine detection. Starting in early 1944, the TF.Mk.Xs were deployed to Coastal Squadrons 144, 235 and 404. In a typical anti-ship attack, the rocket equipped Beaus would first approach the enemies ships at low altitude, firing their rockets. The torpedo equipped Beaus would then follow up, launching their torpedoes at the weak spots of the damaged vessels.

In the Normandy Invasion, the Coastal Squadrons moved their bases to the south of England. From there, the Mk.Xs attacked and sunk many German destroyers and torpedo boats. In March 1945, in the span of only forty-eight hours, Squadrons 236 and 254, flying Mk.Xs, located and destroyed 5 U-boats.