The British Battleship Prince of Wales was the second ship of the King George V class. Soon after her completion in March 1941, she was involved in the historic hunt for the German battleship Bismarck. In October she was deployed to South-East Asia to fortify the important British post of Singapore. However, her short career of a mere 9 months came to a dramatic end when intercepted by Japanese bombers in what was to be known as the "Battle of Malaya". Tamiya is proud to add the Prince of Wales as she stood during this historic naval battle to our high quality Water Line Series. Kit also features Japanese planes Type 96 "Nell" and Type 1 "Betty" attack bombers for a complete set to accurately recreate battle scene. 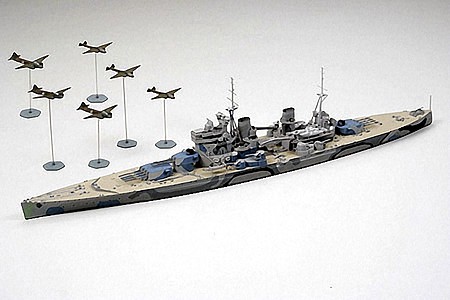 "Great replica of this legendary warship"
cdnmodeller (Edmonton, AB)
This kit depicts the King George V-class battleship 'Prince of Wales', as she appeared near the end of her short career at the 'Battle of Malaya', shortly after Pearl Harbor. This is a very straightforward kit to assemble; parts detach easily from the molds and even the tiniest parts can be handled using tweezers. Smaller replicas of 'Nell' and 'Betty'-type Japanese bombers are included with wires & platforms. The planes can either be depicted with wheels down or airborne as another poster showed in the photos. You will need wire cutters or something similar to cut them for attaching the planes; I actually had to go to a model shop & show them what I was doing so they could find the right tool to use! In the end, I am more than satisfied with the result.