This is a plastic model kit of a 1/32 Scale F16CJ Block 50 Fighting Falcon Jet by Tamiya. 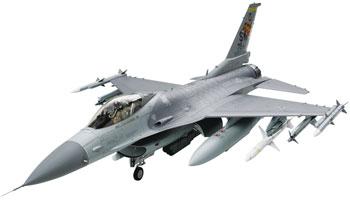 "Another Amazing Kit from Tamiya"
lvlaffey
I want to start off by saying this is my first 1/32 scale aircraft kit and not only am I impressed with the kit but I am now hooked on larger scale kits. It should be no surprise but Tamiya really did a superb job with this kit. Everything from the tooling, details, decals, operating features and quality is top-notch. To start off, the fitting of the parts was probably the best I have seen on any kit that I have done. (I would estimate that I've built around 100-150 models). There were no major seam line issues or sanding required. The only place that required a little bit of putty was on the ordinance. Another great feature was that there was very little to no excess flashing that needed removed. Kit detail was excellent. The entire engine system from the inlet to the afterburner is part of the kit. The engine itself is like a small kit that once built can be removed and installed into the completed aircraft. Other operating features of the model include: removable ordinance, operating canopy, removable ejection seat and opening nose cone. Also included are metal landing gear, canopy masks, rubber tires, photo-etch parts and markings for three aircraft. Overall, I would highly recommend this kit to anyone who has some modelling experience and is looking for a challenge.

#19 in Plastic Model Airplanes 1/30-1/39 Scale
#241 in Plastic Model Airplanes
#1,541 in Plastic Models
"Looks very realistic"
beaubowden6 (Troy Ohio)
This model was given to me as a gift from my grandfather, but it was already build. I recently painted it and it turned out very good. The engine piece on the back was missing so I rolled up a black piece of paper and cut it into an engine. I canâ€™t tell that it is paper unless I look very closely at it. I especially liked the pilot detail in the cockpit. This is a very large product, make sure you have somewhere to put it before buying.

Highly regarded as one of the world's leading lightweight multi-purpose fighters, the F-16 Fighting Falcon is capable of precision attack during air-to-air and air-to-surface combat. The success of the F-16 comes from its precision control, with aerodynamic body design combining with innovative electronic fly-by-wire technology for precision maneuvering at both low and high speeds, and low and high altitudes. Fitted with one single turbo jet engine, the F- 16 has a top speed of over Mach 2. Currently used by more than 20 countries around the world, the F-16 has been deployed to actual conflict since the 1980s including seeing action in significant conflicts such as the Arab-Israeli conflict, the Gulf War, Kosovo, Afghanistan and Iraq.