This is a plastic model kit of a 1/48 F4U-1/2 Bird Cage Corsair from Tamiya's War Bird Collection Series. It's for ages 10 and over. 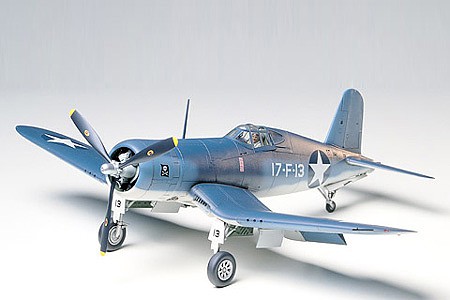 "Tamiya Special - Better built models"
jimwoodward1943 (Broken Arrow, OK)
All parts fit well - instructions easy to follow - very happy with the outcome of this model - its one of my better builds.

#58 in Plastic Model Airplanes 1/40-1/49 Scale
#154 in Plastic Model Airplanes
#1,169 in Plastic Models
"Great Detail and value"
BlucherFamily (Overland Park, KS)
I have always been impressed with both the value for money and the detail that Tamiya pack into there kits. This kit is no exception. There is no over flash and the parts come of the sprues cleanly, requiring little clean up if any. The instructions are clear and the build prceeds smoothly. The detail is impressive given the low price, and I can ensure you that the end result will be a faithful reproduction of this iconic aircraft that will look great in any collection.
"Best Corsairs available in 48th scale"
convairb58
I posted the photo of the F4U-2. Built from the Tamiya kit with very minor modifications. The very early Corsair has only been rendered previously by AMT and badly at that. While the F4U Corsair series from Tamiya is over 10 years old, it still represents the best investment of your hard-earned dollar. Fit-wise, the kit is generally good. Positive location of the assembled cockpit is a little vague, but installing the gunsight ahead of time helps with the installation. Cockpit looks very, very nice even if assembled straight from the box. The outer wing panels can be a bit finicky to mate with the wing center section if one wants to build the model with the wings spread. The insert behind the cockpit to cater for both early and late versions is best glued to each respective fuselage side first. The windscreen for the Birdcage version takes a little bit of extra time with patty and sandpaper to get a nice, smooth blended transition, but its arguably the worst-fitting part in the kit. Wheel wells have some annoying ejector pin marks that need to be scraped away or planked over with plastic sheet. Wheels and tyres themselves are not bad but i'd advise in some aftermarket wheels. Modular parts breakdown of the kit engine makes painting and assembly a snap. If you are interested in late-version Corsairs, my suggestion is to check out the Hasegawa F4U-4, -5, -5N, -7, and AU-1. While accurate, they are a little bit finicky to put together. They are also hard to find, and expensive. If you just want a nice looking Corsair with a minimum of drama, go with Tamiya. You won't regret it.

Designed around the new Pratt & Whitney R-2800 2,000HP radial engine, and turning the largest propeller ever attached to a fighter plane, the Chance Vought F4U Corsair became a legend in its own time.

First flown in May 1940, this gull winged wonder was deemed a winner from the outset. The Navy was so confident in the Corsair that rival companies Brewster and Goodyear were made alternate contractors for the initial order of 584 aircraft. With a top speed of 415mph and a rate of climb of 3,120 feet per minute, the Corsair was the fastest plane in the world at the time. Unacceptable aircraft carrier landing performance however, caused the F4U-1 to become a land-based fighter with the U.S. Marine Corps at the beginning of its career.

In November 1941, the U.S. Navy requested Vought to produce a radar-equipped version of the F4U-1; however, they were too occupied with production to accomplish the request. The task was turned over to the Naval Aircraft Factory which produced 32 of the 34 F4U-2 Corsairs made. Obvious changes were adding a radar dome to the outboard .50 caliber machine gun to offset the radar domes weight, plus flame dampeners installed on the six exhaust stacks. These F4U-2 night fighting Corsairs became the pioneers in developing the technology that led to U.S. night fighting tactics employed throughout WWII.