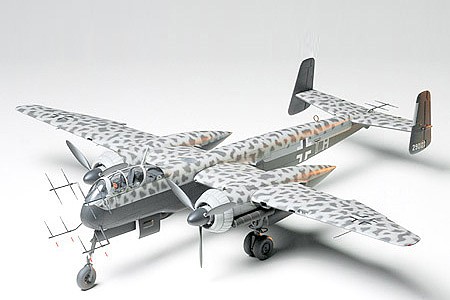 "Another winner from Tamiya."
Patrick (Sydney, Australia)
Great kit with a lot of detail, and a very handy counter-weight to keep it level. It would be improved with the addtion of crew, and that's my only criticism. This is the only model I have that had swastika decals included with the kit, which is a pleasant inclusion. All kits should have proper decals, and manufacturers shouldn't be dissuaded from including the swastika on a decal sheet. If people are offended by it (it is really a Hindu holy symbol misappropriated by the Nazi's), then they can choose to not apply it to the model and I would 100% respect that decision. My parents and grandparents suffered under the Nazi's for 4 years, so I have no love for that regime, but true historical representations should be treated as such. So, well done to Tamiya for bucking the trend in modelling to censor history. Back to the kit, I thoroughly recommend it to any WW2 aviation enthusiast.

#70 in Plastic Model Airplanes 1/40-1/49 Scale
#206 in Plastic Model Airplanes
#1,384 in Plastic Models
"Everything fits!"
jctoymaker
Bravo to Tamiya for another first class kit available. Using the probably thinnest plastic structure for the fuselage, wing and engine nacelles on the market, all the parts fit together beautifully, without warping or misalignment, and very little putty or sanding needed to do. Their instructions again are the best in the business in clarity and procedure. They give a very detailed to scale payout of paint and decals, matching the National Air and Space Museum's sole surviving example of the aircraft, with very clear pictures available on the internet to back them up. Good detail is given on the cockpit radar and landing gear, though Tamiya seems to have a corporate policy to ignore any engine detail in their kits. The lead weight for the cockpit area is a great idea that I wish would spread out to all tricycle landing gear kits on the market. it blends perfectly to the structure of the fuselage. The only complaint I have is that in installing the landing gear, there is no mounting points in the engine nacelles as indicated in the instructions; the are simply not there and required a bit of fiddling to install them. Still, a great kit for a great aircraft. It is amazing what the Germans were able to produce during the war years even after things went finally South for a doomed country with a wicked leadership.
"Can't fault"
BlucherFamily (Overland Park, KS)
This kit is a perfect example of Tamiya quality and value for money. The molded parts have no over fash, come of tthe sprues cleanly, and fit together with precision. The instructions are clear and the build very enjoyable. The result is a very fine representation of a plane that stood at the pinical of German engineering during WWII. A must for any modeller's collection, this a rare masterpiece and as far as I know, onlly available from Tamiya. Oh, and the metal counter weight, cockpit floor is a nice touch, as with out it the finished product would definitely be tail heavy.

Powered by two Daimler-Benz DB603 engines, this aircraft with a long and slender fuselage displayed its combat-worthiness against allied bombers in nocturnal operations during the final period of the conflict. Several versions were produced starting with the He219A-0 in 1942, and among them, the He219A-7 was the final and the most sophisticated version. It is equipped with larger, improved super charger intakes for its DB603G engines. Coupled with a FuG220 radar, two dorsal 30mm canons dubbed "Schrage Musik" plus two each 20 or 30mm canons in the wing-roots and the ventral tray enhanced A-7's capability as a high altitude night-fighter.

Although the total number of production was only 268 until the end of the war, the Heinkel He219 Uhu gained noteworthy results against allied airforces and was supposed to be the best among the Luftwaffe's reciprocating engined night-fighters.

Potentially one of the most effective night-fighters for the Luftwaffe, the Heinkel He219 "Uhu' (eagle owl) was doomed by political misjudgments and maltreatment. Started as a private venture study of the firm, the He219 incorporated a number of advanced features such as pressurized crew compartment, cockpit positioned at the extreme nose for excellent visibility, land gear of tricycle configuration, etc. The He219 was also the world's first operational aircraft to be equipped with ejector seats.