This is a plastic model kit of a 1/48 Scale Lockheed Martin F-16CJ Figther by Tamiya. 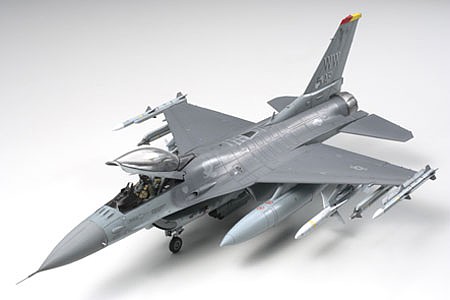 #209 in Plastic Model Airplanes 1/40-1/49 Scale
#601 in Plastic Model Airplanes
#3,040 in Plastic Models
"I like it"
c8coyote
Lots of detail. Takes a while to complete because of the detail. Has aftermarket parts available. Not overpriced. I like how the rudder, elevators, external fuel tanks and ECM pod are not glued on.
"Too much hassle"
Rocket_starship (Boonton, NJ)
This model had too many complications for the scale and piece count. Not a satisfying build; too intricate for its own good.
"skilled labor"
gregchampagne80
There are a lot of parts to this kit but it is a great kit that pays attention to all the details. Everything fits nice and it requires a lot of painting and patience. Good kit

The F-16 is one of the world's top lightweight multi-role fighter aircraft. Since first deployment to U.S. Air Force (USAF) units in the late 1970's, total production numbers have exceeded 4,000, making it the second most highly produced jet fighter plane following the F-4 Phantom. The latest F-16 variant deployed to USAF units, the F-16C Block 50, is capable of precision night and all-weather bombing, and features advanced digital electronics for radar and cockpit displays. The slight variant, the F-16CJ (Block 50), is fitted with HARM Targeting System (HTS) and is used specifically for SEAD (Suppression of Enemy Air Defenses) missions. The F-16CJ (Block 50) has flown SEAD missions over Iraq while monitoring the northern and southern no-fly zones and during Operation Iraqi Freedom.

Accurately curved bubble top canopy can be assembled in the opened or closed position.

Horizontal stabilizers are movable and flaperons can be modeled in both the up or down positions.

One pilot figure included and can be depicted with either standard or JHMCS flight helmet.

Detailed markings for 3 aircraft, including the 5th Air Force commander's aircraft stationed at

Misawa airbase in 2005, are included.