This is a plastic model kit of a 1/48 Scale Messerschmitt Bf109E-4/7 Tropical by Tamiya. 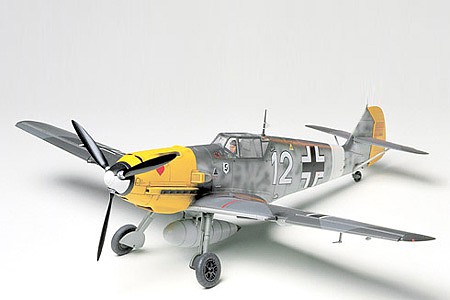 "excellent kit"
jeby64
just like every Tamiya kit I have built, the detail is exceptional. fits together very nicely, recessed panel lines make for easier weathering, and decals were great. strongly recommend it. when the kit goes together well, it is a lot easier to make it look better as far as paint and detail work.

#22 in Plastic Model Airplanes 1/40-1/49 Scale
#44 in Plastic Model Airplanes
#421 in Plastic Models
"Beautiful Emil"
Jeff
Just finished this kit this morning and what a beauty it was. The fit was excellent with only the tiniest bit of putty being required along the top of the engine. The instructions are quite clear and easily followed. Just keep in mind that there are alternate parts to use depending on which version of the aircraft you are constructing. The decal sheet is pretty good, a bit thick perhaps but nothing to concern one's self with. The cockpit transparencies are excellent. I would recommend purchasing the masking set available from various places in order to get a good clean finish on the canopy. The landing gear is simple to construct and looks good when complete. The cockpit is fairly detailed and if you choose to build your model with the canopy closed then there is little need to add aftermarket stuff. Should you choose to build your model with the canopy open, I would suggest at least aftermarket seat belts at a minimum as the decal belts look rather cheesy. I finished my model as a ship from JG 27 flying from Libya. I used Tamiya paints and the dark green mottling was applied by mixing olive green and black pastels and then using a brush to apply same. I put somewhere in the area of 25 hours to construct my model. It was built OOB except for the antenna wiring which is a combination of grey thread and thin metal wire. I would recommend this kit to anyone who is at least a moderately skilled model builder.
"Fun Little Build"
jc (Missouri)
This was a fun little build, fit was great, no issues there. The 4 stars is for the thickness of Tamiya Decals. Love their models, hate their decals.
"The Enemy Looks Good"
mirecyli
My grandson likes all the bad guys in Star Wars so in a sense I am like him because I think German WWII aircraft and Japanese just look good. They all look mean whereas ours USA look like good 'ole Uncle Sam maybe all of ours looked mean to them ! All my Tamiya kits have been a joy to build never having a problem. The problem I did have with this one was due to my skill level. I can not get the hang of an airbrush but paint with acrylics and brushes. The yellow on the nose of this build came out too thick and does not show well. But the kit itself looks fine.

During the first half of the Second World War, the Messerschmitt Bf109 E was the main fighter of the German Air force. The E-4 housed a 1,100 hp Daimler Benz DB 601Aa engine and was armed with two 7.9mm machine guns on the nose, as well as 20mm cannon on each wing. For some aircraft, bulletproof glass was used to reinforce the front of the canopy. In addition, a 20mm cannon, which ran through a tube in the propeller was supposed to be installed but was unsuccessful. Displaying superb acceleration and diving ability, the E-type planes overpowered RAF½s Hawk Hurricane and equaled the Spitfire fighters in the Battle of Britain. However, with a flight range of only 560km, the E-4 planes were limited to just fifteen minutes of combat over British skies. Thus, the bombers were not given sufficient support and sustained heavy damage. As a result, the Luftwaffe½s strategy to bomb England into surrender ended in failure. To deal with the drawback, the E-4 planes were equipped with an additional 300L fuel tank. These improved fighters, called E-7, were first deployed at the end of 1940. After the Battle of Britain, the E-4/7 planes were sent to the front lines of Northern Africa. As the Bf109 F-type fighter½s production advanced, the E-4/7 was retired from the front lines. However, some veteran pilots continued to use the E-4/7 mainly for ground support duty until the summer of 1942.