This is a plastic model kit of a 1/48 Scale Messerschmitt Me 262 A-1a Fighter by Tamiya. 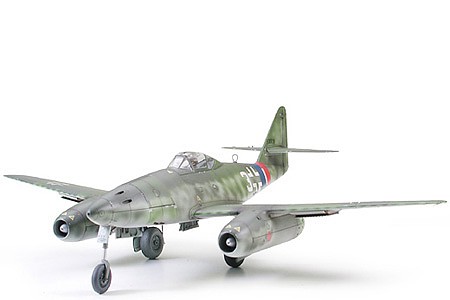 "Awesome kit"
Rick P. (Henrietta, NY)
Another extremely well designed kit by Tamiya. Goes together perfectly, has well thought out and detailed instructions. Kit comes with decals and painting instructions for four different versions. Front landing gear tub is made of metal, which keeps the aircraft balanced when sitting on the landing gear. Details are extremely good- panel lines, rivets, cockpit- all well represented- just like I have found all Tamiya kits to be over the years. This was a fun kit to build. Highly recommend getting this one for your collection

#60 in Plastic Model Airplanes 1/40-1/49 Scale
#159 in Plastic Model Airplanes
#1,246 in Plastic Models
"Very Nice Kit"
dswebb1
Typical Tamiya kit, great fit and engineering. No major problems to build. Looks great when done.
"Excellent kit with very good details"
davezz4 (Schaumburg, IL)
Tamiya has done it again. Producing a nicely detailed kit. The kit is easy to build as the fit is excellent. The kit even provides the gun mount floor made out of metal so the model sits correctly. The gun bay doors can be displayed open. Instructions are very well organized to make assembly easy. The decals are very nice and look great allowing details below to show thru the decal. I would highly recommend this kit.

The revolutionary Messerschmitt Me262 was the first jet powered plane to see service. The construction of pre-production aircraft designated Me262 A-0 started in April 1944 but the fighter production version that should have been the first version to be mass-produced was delayed because of Hitler's strict contrary orders prioritizing the deployment of fighter/bomber A-2a version. Then, in November 1944, the Me262 A-1a fighter version was finally put into production. It was equipped with four 30mm cannons in the nose to counter Allied bombers and escorting fighters. Late production planes were equipped with hooks under the nose to mount rocket launchers and with 24 R4M air-to-air rocket under the wings making the Me262 the most feared German fighter by Allied pilots.