This is a plastic model kit of a 1/48 Scale Republic P-47M Thunderbolt Fighter by Tamiya. 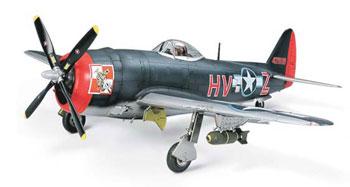 "A great kit"
BlucherFamily (Overland Park, KS)
This is one of my favorite aircraft from WWII, and I have built the Revell kits of the various P-47's before. The reason I bring up the Revell kit is this one from Tamiya is superior in almost every way possible. No over flash and parts come off their sprues cleanly with little if any cleanup required. The fit is also amazing, almost too perfect to believe and no puttying required. One of the key differences and surprisingly so, was parts on leading edge surfaces such as machine guns and radio masts were not molded in place but needed to be fitted. I was very impressed with that one little feature, as in handling wings and fusilage on other kits , protruding molded pieces like these can often be damaged or get broken off. The advantage of fitting them is that this can be done last after all the handling has been done and that is exactly how it should be. Once complete and painted this kit is remarkably life like, and the detail really does add to the realism. You will enjoy building this kit and enjoy the finished result even more.

Following the release of 1/48 Republic P-47D Thunderbolt Razorback and Bubbletop versions, Tamiya further increases the range of choices available to modelers with the development of the P-47M. New parts include vertical dorsal fin, air brakes, cockpit parts and new markings.

About the Republic P-47M Thunderbolt

Introduced as a fighter escorts for bombers attacking the German homeland, the Republic Thunderbolt went through the Razorback and Bubbletop variations as it fulfilled its duty. The P-47M was a special high-speed fighter that was specially designed to counter German threats like the V-1 buzz bomb and new jet-powered fighters evolved by the Luftwaffe. The P- 47M featured a P-47D-28-RE airframe fitted with a high-powered R-2800-57 engine capable of top speed of 761km/h, while air brakes were installed underneath the wings to aid in deceleration. Rushed to service with the 56th Fighter Group in Europe, the P-47M only saw combat in the last few weeks of the war, yet achieved the distinction of downing a German Me262 jet fighter.

2 all-new sets of markings based on dark-blue/blue patterned camouflage used by the 56th Fighter Group of the 8th Air Force.