This is a plastic model kit of a 1/32 Scale Vought F4U-1 Corsair Birdcage by Tamiya. 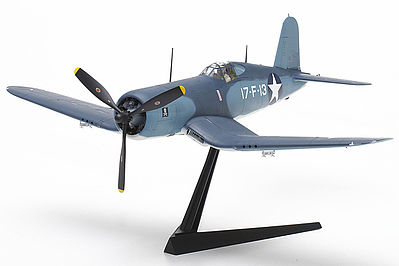 "Great Model"
gwcreel
Just a pure joy to build and every part went together perfect!

Special feature 1 : Main landing gears can be depicted in raised or retracted position.

Special feature 3 : Comes with 2 figures to depict pilot in seated or standing position.

Special feature 6 : Comes with stand to depict the aircraft in airborne state.

Special feature 8 : 2-piece engine cowl is removable even after completion

#72 in Plastic Model Airplanes 1/30-1/39 Scale
#573 in Plastic Model Airplanes
#3,022 in Plastic Models
"Corsair lovers dream come true"
nscrfns (Killeen, TX)
Another excellent Tamiya kit. Parts fit is excellent. No flash. Like all Tamiya kits this one has amazing detail. If you are a Corsair lover this is a must have. THE best Corsair ever produced. More than enough detail. Much of the detail will be invisible once closed up. This kit begs to be the subject of a diorama where it can be displayed opened up for all to see. Control surfaces moveable if desired. The engine is a kit in itself with enough parts it keep you entertained for many hours. Truly a joy to build. Don't rush it, take your time and give it the respect it deserves. Highly recommended

The F4U-1 Corsair was a truly unique aircraft, with a powerful 2,000hp engine and a massive 4m propeller, not to mention the highly characteristic inverted gull-wings. In October of 1940, it was the first American fighter to achieve a speed of 400mph (around 640kph). Initial production models of the aircraft featured a striking canopy called the "Birdcage". The aircraft took part in operations from February 1943, and with its powerful 12.7mm machine guns proved to be a formidable opponent for the Japanese Zero Fighters.

In order to capture the aircraft as accurately as possible, Tamiya designers not only inspected, measured and examined the real aircraft at five different museums across North America, they were also given access to Northrop-Grumman's blueprints. The result is a highly detailed and precise 1/32 scale model of the F4U-1 Corsair.