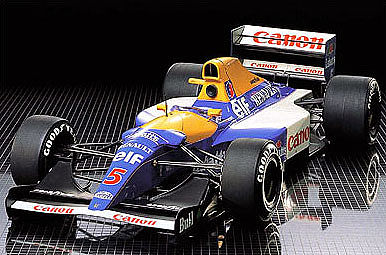 Frank Williams, the founder of the renowned Williams Grand Prix Engineering, ventured into motorsport racing during 1961 as a race driver. In 1969, he brought a Brabham Formula One racer, and formed his first team, calling it "Frank Williams Racing Cars", and began racing in Grand Prix events. His first 10 years in Formula One racing were spent learning, not winning; but in 1977 he teamed up with a very talented designer, Patrick Head to form the group which has achieved true success. Their type FW07 series racing machine was first introduced in 1979. It successfully demonstrated the "ground effect" theory and rewarded the team with two consecutive constructors titles for 1980 and 1981 racing seasons. During the height of the turbocharged engine era of F-1 racing, and in collaboration with Honda, Williams again successfully took the constructors title for 1987, using their type FW11B racing machine. Teh drastic racing regulation changes that banned turbocharged engines took effect on Formula One racing beginning with the 1989 season. Thereafter, only normally aspirated power plants were allowed to compete in these events. Williams new partner, the French firm Renault, did a magnificent job in developing a new 3.5 liter V-10 engine that enabled Williams to finish the '89 season in second place for the constructors title. Both Williams and Renault continued to improve and make progress which led to the development of the Type FW14 car, using a semi-automatic transmission for the 1991 season. Their efforts were further enhanced by the addition of driver Nigel Mansell, who joined the team and concentrated on improving the performance of the car by incorporating the raised-nose layout for better aerodynamics. The 1992 version type FW14B racer was, without a doubt, the racing machine of the year. In addition to its very reliable semi-automatic six-speed transmission, the FW14B incorporated an innovative active suspension system. This highly sophisticated system used a ride height control which enabled the car to maintain stability during hard braking and high speed cornering, minimizing massive weight transfers that can affect the performance of the car. The carbon composite monocoque section of the FW14B was cleverly designed to eliminate the use of a separately removable forward body shell. Renault's progress with their 3.5 liter RS3 series V-10 engine was also a major factor in making the car a winner. The latest type RS3C power plant was prepared in conjunction with Elf fuel technology for the 1992 season, and showed its sensational performance by outrunning the competition. The dominance of the FW 14B racing machine, in combination with the driving prowess of Nigel Mansell and Riccardo Patrese enabled the Willams team to clinch both the drivers and constructors titles for the 1992 Grand Prix season.