Keep calm ... Hobby on. Please be patient during this time. We are open, but orders may be delayed unexpectedly.
> Plastic Models > Airplanes > 1/40-1/49 Scale : Trumpeter A-3D-2 Skywarrior Strategic Bomber Aircraft tsm2868 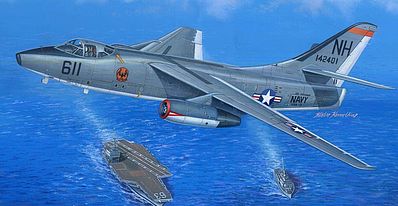 "Deployed Whale"
johncpo41 (www.hobbiesinabarn)
I have yet to build this kit and it is definitely on my list! I served aboard the USS John F. Kennedy (CV-67) while one of these aircraft was deployed to the ship. I cannot say what the role was of the aircraft but the immense size for a carrier-borne aircraft was impressive and it was always an eye-catcher! From the photos of the built model I can assure the consumer that this is one great kit. Once again on my list as I have always wanted a 1/48th scale model of the plane. Building an EA version model would not take much as these aircraft were all modified into the electronic version and reference photos do exist. The highly classified- role aircraft was depicted in the USAF version in the movie BAT21 with Gene Hackman and Danny Glover. The true identity of the interior of any version is still a highly guarded secret!

#161 in Plastic Model Airplanes 1/40-1/49 Scale
#489 in Plastic Model Airplanes
#2,836 in Plastic Models
"Big and Heavy A-3D2 Skywarrior, nice kit overall"
Ed H. (Byron, GA)
Nice kit, and BIG!!! Can be built in a variety of options (bomb-bay, crew ladder, speed brakes, flaps slats open or closed, wings and tail folded or unfolded). The interior is nicely detailed however the cockpit console has some fit issues that need to be trimmed before fit.

The Douglas A-3 Skywarrior was a strategic nuclear bomber developed for the US Navy. The aircraft had a largely conventional semi-monocoque fuselage, with two J57 turbojet engines in underwing nacelles, A-3's wings can be folded for storage below deck, radar-controlled tail turret and a crew of three. The A-3 Skywarrior project started in 1947, The prototype XA3D-1 first flew on 28 October 1952, entered service with the Navy Heavy Attack Squadron One in 1956. Production ended in 1961. Douglas total built 282 Skywarriors.