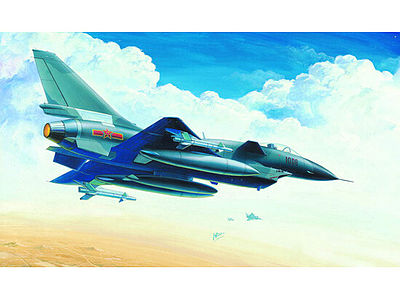 The Chinese New Fighter project is believed to have begun in the mid-1980s to develop an indigenous Chinese fighter equivalent to the Mirage 2000 . The aircraft is reportedly similar to the American F-16, The resulting design, features a delta or double-delta wing with canards mounted just aft of the cockpit. The New Fighter is believed to be powered by a single Russian AL-31F turbofan and most avionics (including the radar) are also of Russian origin. Early artists impressions have indicated an F-16 style engine inlet, but more recent photots suggest that the aircraft may be equipped with a rectangular inlet reminiscent of the Eurofighter Typhoon. The design may have also gone through a major revision recently to include more stealth features. The J-10 is envisioned as a multi-role fighter replacing the obsolescent Q-5 and J-7 and armed with much improved weapons. In the air interceptor role, the New Fighter will likely be armed with the PL-8 infrared-homing short-range missile (a copy of the Israeli Python 3) and the radar-homing medium-range PL-10. A variety of precision-guided bombs and air-to-ground missiles are also expected to be fielded to support attack duties. Although it is believed that over 300 New Fighter may be built for the Chinese Air Force and Navy. If production does proceed, it is likely that an New Fighter export variant will also appear. At least four prototypes had been built by 2001 and service entry may occur in 2005.