Keep calm ... Hobby on. Please be patient during this time. We are open, but orders may be delayed unexpectedly.
> Plastic Models > Airplanes > 1/40-1/49 Scale : Trumpeter Mig19S Farmer C Fighter Aircraft tsm2803 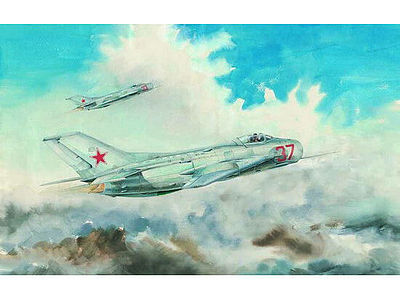 The MiG-19 Farmer was the first supersonic fighter built in the former USSR. The MiG-19 prototype made its first flight in September 1953 and was placed into production in 1955. It was the Soviet Union's primary fighter during the last half of the 1950's. Possibly as many as 10,000 MiG-19's, in various versions, were built by the Soviet Union, China, Poland, and Czechoslovakia. About 2,000 have been built in the People's Republic of China. Many other countries used the MiG-19, including Cuba, North Vietnam, North Korea, Iraq, and most of the Warsaw Pact nations. The Soviet Union phased out the MiG-19 in the early 1960s in favor of the more advanced MiG-21. However, the MiG-19 continued to be used by the other nations for many more years.