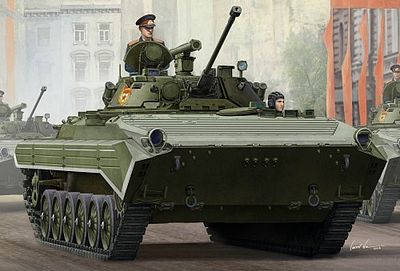 The BMP-2 infantry combat vehicle, fielded in the early 1980's,It is an improved version of the BMP-1 incorporating major armament changes. The new two-man turret mounts a 30-mm automatic gun with a long thin tube and double-baffle muzzle brake that can be used against aircraft and helicopters. The ATGM launcher on top of the turret can employ either AT-4 or AT-5 missiles, though the AT-5 Spandrel canister is normally mounted. Given the enlarged turret, there are two roof hatches in the rear fighting compartment, rather than the four of the BMP-1, and the the BMP-2 accommodates one less passenger. Each side of the troop compartment has three firing ports with associated roof-mounted periscopes.