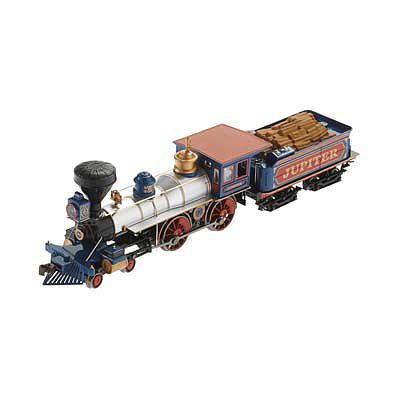 "Bachmann Sound Value Steam Engines #52702"
samuraihoghead
This model runs very well, but most Bachmann engines do anyway. However I made changes. The wood in the tender is quite unconvincing so I painted it by hand rather than an air brush. This made a big difference in appearance. I have six locos of this Sound Value class; 4 steam 2 diesel. But with these steam engines their virtue (affordable sound) is their drawback. The sounds themselves are pretty nice, but there is zero synchronization between wheel speed and sound speed for the chuffs of the exhaust. At low speed this is not as noticeable but it doesn't take long for for a train travelling in excess of a scale 25mph to sound like it's doing 250. For me this is not a drawback as I have very little high speed track on that piece of my layout which is an early period and logging. There is one bit of irony. This engine is one of few that should have had a a molded or cast pilot with a link and pin draw bar on the front. Instead it has a an operating coupler that screams anachronism. I'm going to change that as well. All in all I am very satisfied with these engines, or I wouldn't have more than one. You won't be wasting money in purchasing one.