This is the 1/35 scale Sturmgeschutz III Ausf.G "Finnish Army" Tank plastic model Kit from the 1/35 Military Miniature Series NO.310 by Tamiya. For ages 14 years and up. 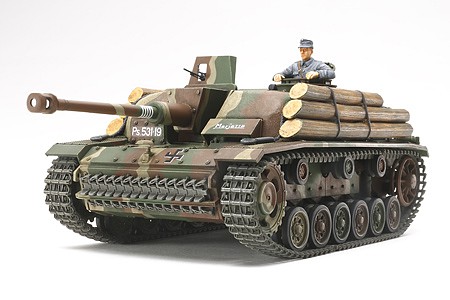 "surprise surprise"
papagabriel (Naples, FL)
Bought this cause I was looking for something different and found it. I vaguely remembered learning about Finland fighting the Russians around WW2 but had no other info. Well lo and behold found out they fought with the Germans against Russia. This model is representative of some of the German equipment the Fins used. I don't have the German version of this model and was going to build it as a German vehicle, then got into the build and decided to go with the Finnish version. Glad I did. Also it says you get one figure, oh no you get a surprise. There are two extra figures and a yittle doggie. Thought it was a defeathered chicken when I first saw it without its head. Ok enough jibber jabber down to the model. I have found Tamiya to be one of the better modeling companies. The fit is good, there was no flash. Not the case with all Tamiya models but for this one was great. But there was no platform for the crewman to stand on to feed the dog. I solved it prompting my grandson to ask why does he have stilts. You'll see in the pictures. Buy this one. It's a little different than other models with the use of non-armor items to help protect the vehicle.