Keep calm ... Hobby on. Please be patient during this time. We are open, but orders may be delayed unexpectedly.
> Plastic Models > Cars / Trucks / Vehicles > Military : Italeri Fast Assemble Half Track ita557509 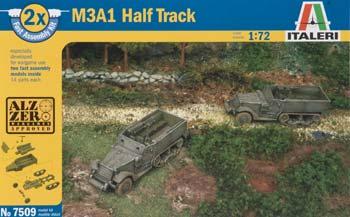 "half tracks"
woofdogmeow
i built both of these in about 40 minutes. The only hassle I had was a spike of plastic in the crew compartment. The spike as very tall and thick and had to be removed to install the floor of the crew compartment. it breaks off by hand but it leaves just enough plastic to stop the floor going in. So you will have to cut that bit out with a knife. The only other hassle was when I removed the machine gun from the grid the barrel broke as it is very thin. so take it slow with the machine gun. I simply glued my broken barrel back on and it came great. you will be hard pressed to find a better half track in this scale.

(Pictures shared by our community)
Add Yours Now