This is a Battleship Bismarck Plastic Model kit from Revell Suitable for Ages 13 & Older. 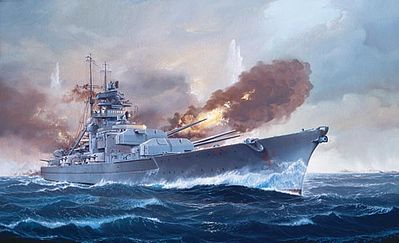 "Revell-Germany's Best Kit That I've Built."
wildners (Traverse City, MI)
I'm not sure about the whole history of Revell, Revell-Monogram, and Revell-Germany, and their relations to each other, but after building kits from all three of those manufacturers, I would say that the DKM Bismarck is by far the finest kit I've built from any of them. This was a Christmas present from my wife and I just had to marvel at it for almost a year before I got around to spreading out all the parts trees and checking it out. This is definitely not for beginners, and I would recommend a lot of patience because it will take a long time if you want to get all the details right. When I finished the model, I kept the box top, cut it out and gave it to my 11 year old son who proudly displays it on his bedroom wall like its a poster of his favorite rock star! As far as the usual plastic ship model complaints of excess flash and non-fitting parts, I can honestly say I didn't experience much of that with this kit. Very good quality control here. The only three cons I could come up with were: 1) There are a couple little quirks in the instructions where the picture doesn't give enough detail to get the proper part fit in a couple of places. The one spot I recall having the most difficulty was with the seaplane hangar deck area and the cranes. 2) There was also a strange gap in the walkway between the forecastle and the smokestack that I could not quite figure out, but at that time in the assembly I would have had to have taken way too many pieces apart to even attempt to make a fix. So as completed, it looks like any real-life crew would have to make quite an Olympic record-smashing long jump to cover that space, but since I'm not using this for a competition or a movie I decided to live with it. 3) The large decals for the dazzle camouflage pattern were a disaster. Even though I was trying to be really careful, using Decal Fix and tweezers and small sponge brushes, if I did not get them in the exact correct spot and tried to move them , they would rip. After that frustration, I decided to just junk those decals and paint the black/white stripes by hand. I think I actually liked the look of that better in the long run anyway. Overall I would recommend this for experienced ship modelers ONLY. You're going to have to invest a lot of time and patience if you want it to look good in the end, but I think it was all well worth it. One of the other things that might puzzle some modelers not familiar with German law is that since this is manufactured in Germany there are no Swastikas included as far as flags, decals or deck markings. Depending on some options you will also end up with a plethora of extra parts, so I've just added these to my 'Frankenstein' storage bin. I'd love to see Revell-Germany do 1/350 kits of the World War I era German warships, I think they could really excel at that too, and as far as I know they are still allowed to use the old imperial symbols of Kaiser Wilhelm's navy. When I got into working on this beast of a ship, this became my first time at tracking both my actual hours as well as the elapsed time (number of days) that it took to complete the project. From here on, any other new Hobbylinc reviews that I submit will also include these stats at the end of my review. Total Construction Time: 56 hours. Total Elapsed Build Duration: 8 Months, 9 days.

#74 in Plastic Model Military Ships
#89 in Plastic Model Ships
#1,704 in Plastic Models
"1/350 Bismark (Revell)"
jbuchman
It's a big kit for a larger than life ship. The kit fit together very well and the directions were very good. It was a little cumbersome using Revell's painting code. It came with painting schemes and decals for 3 different versions, including a more accurate scheme for her sortie from Norway on her last mission. It came with plastic railings for all levels and detailed rigging details. I used a White Ensign PE set with an Art Wox wooden deck along with Eduard figures and I liked how it turned out. A very good kit for a relatively low price.
"Bismarck"
dereisig
This is a very detailed kit, everything fit tougher well to. Some of the parts a very small, but if you take your time and don't loose any of the small parts you will be good. Makes a great display to. I had a good time with this one. And highly recommend this one. If I do another one, I will paint the water line instead of the decal.
"Great ship"
hunte0062000
Very good model..Lot of fun...Color codes in german