This is a 1/72 scale World War I Fokker DR.I Plastic Model Kit from Roden. 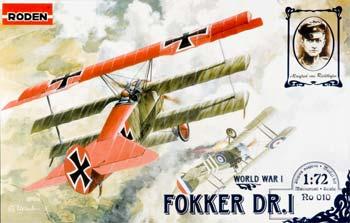 "Seeing Red!"
Jimmy D.
Baron Manfred von Richthofen often left his hapless opponents in the skies seeing red, literally, because he often adorned his aircraft in bright red so as to get their attention. Thus began the saga of the Red Baron. Though he is mostly known for flying the Fokker DR-1 triplane, the Red Baron scored many of his combat victories flying various models of the Albatros as well. Roden's Fokker DR.1 is a lovely kit that is, to date, the best offering in this scale. The level of fine detailing is remarkable and it is obvious that much thought went into producing this kit, The radial engine is a little jewel that lends well to detailing and washes. The fact that all parts seem to be accurately scaled in terms of size and thickness means that they are also extremely delicate and easy to break or lose as well. This is not a kit for everyone and if you aren't prepared to use careful planning and delicate handling, then you would do well to avoid this kit and try building a DR.1 in a larger scale. I encountered a few minor issues in my build including the middle wing to fuselage join. The wing portion was slightly too wide causing an overhang at the front end of the cockpit. I remedied that by slicing a notch at the center and rejoining the section with a little super glue. The decals were slightly out of register and I had to do some minor paint touch-ups on some of the more obvious misalignments. I chose to build version shown on the box with the pink sections on the top wing. For the red portions, I chose Testors Guards Red instead of the Insignia Red that was called for in the instructions. This is a richer, more intense shade of red that I'm sure the Baron would have approved of. The streaked camouflage on the lower wings and forward fuselage were done with an airbrushed base coat of Testors Field Drab, followed by dry brushing streaks of Olivegrun and flat Tan. I also chose to add the little bit of wire bracing that is used by the landing gear and the exposed control cables. I made mine from 2 LB test fishing line. In my references, I found a photo of this actual aircraft, No. DR.1 152 / 17 that von Richthofen flew in March of 1918 when he scored his 64th victory. He started flying the all red DR.1 later that year and up until he was shot down in it. Good luck!

#91 in Plastic Model Airplanes 1/70-1/79 Scale
#232 in Plastic Model Airplanes
#1,951 in Plastic Models
"be careful with the little parts"
Remington1858 (Colorado)
The struts are very weak Brittle so be careful... especially getting them off the sprue. The Revell version in the same scale was more stout in the struts... so easier to handle.
"yuk!!!!"
bigaljr1962
this was a horrible model to build!some parts had locator pins with no place form them to go. the instructions were horrible. the plastic is soft and bends very easy and some of the TINY parts were broken on the sprue. the only reason i gave it one star is because with LOTS of swearing and time it does look good hanging from the ceiling dog fighting with a sopwith camel.if buying this for a display on a desk top or something like that good luck!!!
"Nice Kit, Needs a Pilot"
Keith I. (Buffalo, NY)
The kit is nicely manufactured.There were very few parts that did not fit perfectly. The only reason I gave it 4 stars instead of 5 is the lack of a pilot. With the open cockpit,the plane really should have one. I enjoyed doing the colorful paint scheme.

Keep small parts and sharp edges away from children Care should be taken when using tools and modeling knives Modeling paint should only be used by an adult in a well-ventilated area.