This is a 1:35 M18 Hellcat US Army Gun Motor Carriage from Academy Plastics. It's for experienced modelers.

The M18 Hellcat is not really considered a tank, but is designated as a gun motor carriage. This means it is mobile artillery intended more for infantry support. The M18 was used primarily during WWII. It was quite fast for a tracked vehicle, with a top speed of 55mph. It was powered by a 9-cylinder radial engine producing 340 or 400hp. A total of 2,507 M18s were produced between July 1943 and March 1945. 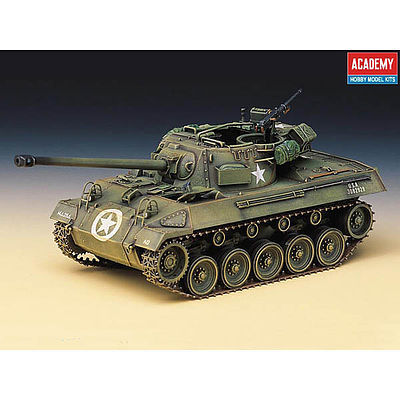 "Amazing and fun kit."
Jacob Hillstead (California)
There is not a whole lot of kits of the M18 out there but that's okay because academy has this amazing kit to offer. I do know AFV club has one I never got my hands on one. This kit has lots of details on it every thing goes on smoothly I do recommend trying a couple low part count kit before this one. This kit has a option of choosing gun matlets. I highly recommend leaving the drivers hach open to actually see the inside. Paint as you go because it might be harder to paint after building it.

#43 in Plastic Model Military Vehicles
#77 in Plastic Model Cars / Trucks / Vehicles
#183 in Plastic Models
"An Aggravating Build..."
tigeri-e
I have been building armor kits for forty years. IPMS Nationals trophy winner, etc. While I have real hopes of finishing this M18, it has been one of the most frustrating builds I ever encountered. The instructions are frequently vague about the location of parts. Once one figures out where a part goes, good luck with the fit. Some parts (see the E sprue) are mislabeled. I used the rubber tracks, having let the sprocket and rear drive wheels dry tight overnight...and watched in horror as the left track ripped a wheel and part of the chassis off the model. That was repaired, as were other bad surprises. Even if they are crude and simplistic, even the first armor kits from Tamiya were carefully engineered for accurate and failsafe assembly and things fit as they should. I will complete this thing, right down to the awful decal film, but feel that the demands of fixing this mess with stretched sprue and stuff from the junkbox should have been unnecessary.
"A lot of work but looks good"
snod
My Hellcat looks good, but it was a lot of work. You have a lot of options and these are the ones I went with. First I chose not to add the fenders. Second I went with the canvas dust cover over the gun mantlet. Third you can add either a strait gun barrel or add the muzzle brake to the gun. Forth I left the drivers hatch open to show this area. Pros: A good amount of detail of the transmission, driver seat and front gunner seats. If you remove the turret a lot of detail inside. The turret is full of detail including a radio (two types). Either rubber or individual tracks. Extra accessories are included.( ammo, ammo boxes, ammo tubes, jerry cans, string for the metal cable, back packs and tarps) Cons: Instructions are poor for part locations. Used reference material a lot. Did a lot of filling of holes in parts and cleaning them. Back of the hull did not match up with the upper deck and left a 1/8 gap that had to be filled. Decals where terrible. They wanted to roll up on me. If I had not put a dull clear coat on I think they would have fallen off in a week. The rubber tracks fit to tight. One even broke apart so I had to glue them and it held. No figures included. If you take your time, clean your parts good and double check all your fits before you glue them you will be ok. Recommend experience builders only. I might get it again and change up the options so I have a different looking version.
"Great Replica of an Outstanding Fighting Vehicle"
tirith42
The M-18 was an outstanding and underrated fighting vehicle used by U.S. forces in Europe. It was the fastest tracked vehicle of the war, and had the highest kill-to-loss ratio of any tank or tank destroyer.This kit of the Hellcat has been around since avout 2000, and it sat on my shelf for a long time. Finally dug it out and built it, and thoroughly enjoyed it. In general, itâ€™s a solid kit with plenty of detail and good fit, and produces a beautiful Hellcat. Here are some details of the build: The kit comes with a nicely detailed interior comprising the driving and fighting compartments. The chassis and hull fit together well, and the wheels include poly caps that allow the wheels to turn. Overall fit of the kit was excellent, and no filler was required anywhere (one of the reasons I work largely in armor now, and donâ€™t build aircraft nearly as often as I used to). The tracks, like most Academy kits, are a tight fit. I left off the rear idler wheels and put them on along with the tracks to make the process easier. In addition, the vinyl tracks are not like modern one-piece tracks that can be joined with regular plastic cement. They call for the old melt-the-pins-with-a-hot-screwdriver method, which never works well. I roughed up the attachment points of the ends of the tracks and glued them with CA, which seems to have worked well. If you donâ€™t like the vinyl tracks, the kit comes with link-and-length multipart tracks. I chose not to use them. Academy plastic is not my favorite. When scraping seems and mold lines, it makes your scraper/blade bounce and results in a less than smooth result. You just have to be careful with the parts. There is a decent assortment of on-vehicle accessories, including the usual tools, but the kit also includes extra ammo rounds, cases, a couple of boxes, jerry cans, .50 cal. Ammo boxes, and some kit and equipment bags. Academy provides a string and two plastic parts (for the end loops) for a tow cable. String is not a great option for a cable, and braided copper wire is much better. However, the string wasnâ€™t particularly fuzzy and looks OK. Sadly, I misplaced my cable after assembly and painting, so it is not on the vehicle. A nice representation of the 50 cal, machine gun is included. I drilled out the end of the barrel for a more realistic appearance. No crew figures are included. I painted mine with a base coat of traditional olive drab, and then did some pre-shading with black along panel lines and edges. After that came a light, misted coat of lightened olive drab. Weathering was done with pastels after a coat of Tamiya clear flat from a rattle can. This is a great Hellcat at a great price, about 28 hours of building enjoyment. Highly recommended.