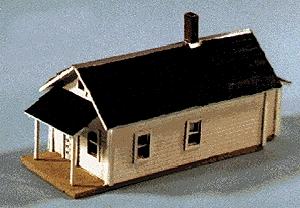 "Layout Structures"
w3158823
Laser cut structures are a must for any DIY'er for ease of modifications!

Shotgun houses (So named because all of the rooms were in a straight line with each other; you could supposedly fire a shotgun through the open front and back doors without hitting any walls!) were the "row house" of the southern states, but were seen in most other parts of the USA. Usually built in groups near the tracks, this kit also makes an excellent company house outside a mine or other industry. The model features laser-cut walls, doors, windows, floor and sub-roof, along with laser-cut peel and stick trim and roofing. Parts for an optional back porch addition are also included, along with a cast metal chimney.