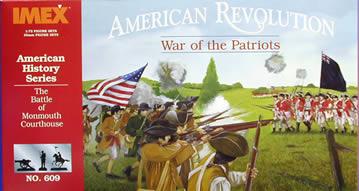 "there are two versions"
d.t.g
According to Plastic Soldier Review - Particularly in the early part of the war, militia units were a considerable part of Washington's army, so this set is not exactly mislabelled, and some of the figures could be painted to represent men in uniform. To even the balance up a bit more IMEX have withdrawn a couple of militia poses and added some regular army ones. These are the drummer boy, the wounded man sitting on a log, the mounted officer (who could be Washington himself) and a mounted standard bearer who seems to be a light dragoon. Will review once I get my order.

#36 in Plastic Model Military Dioramas
#43 in Plastic Model Dioramas
#2,377 in Plastic Models
"Good figures, poor diorama"
angusjwhittaker
First of all, the figures are fantastic. There's tons of them, all well modeled with no flash to speak of whatever. This is an impressive feat. The poses are all very cool, many of them original, and historically accurate as far as I can tell. The artillery is really cool, too, and fits together easily with a bit of glue. It's really neat how Imex combined 4 sets - the patriot infantry and artillery, and the redcoat infantry and artillery - and sold it all together for 24 bucks. Nice. My big complaint is the diorama base. It stinks. I guess, if one holds it up to the light just so, you can see the stream running through it, and I guess the ground can be classified as textured if you stretch the limits of the definition, but otherwise, it's no good. The base slopes inward toward the center, making it difficult to set up guys on it. It's also hollow and cheap feeling, and any piece of plastic used for packaging could work just as well. However, this set stands alone without the base (little pun there, stupid though it may be) and the diorama does not really detract too much from the value of the set, unless you really wanted the diorama aspect.
"Contents not what is listed on box"
chuck57ca (Lone Pine, CA)
Although the figures are well cast the contents are not what is listed on the box or in the description. There were more figures than described but half of them are duplicates and other are completely missing. I ordered this because of the missing figures. I definitely would not recommend this item.
"BATTLE OF MONMOUTH COURTHOUSE #609, 1/72 scale"
none
This is a nice set, but there are supposed to be horses and riders in this set, but there are not.

The product doesnt come with 2 riders and 2 horses. The manufacturer should be able to supply them while supplies are available.