This is a 1/72 World War I Pfalz D.III Plastic Model Kit from Roden. 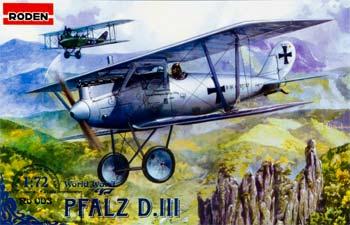 "Pfalz D.III Plastic Model Airplane Kit 1/72 Scale Review"
Alex Biever
This 1/72 scale kit is from a Ukrainian model company that Iâ€™m quite familiar with called Roden. Some of their kits Iâ€™ve worked on in the past are good while others are not so good in my opinion. I like to believe that this kit follows on the good side of Roden. The pros of this kit are as follows: You have four paint schemes to choose from and the one I did was flown by Lt. Hans Klein (22 victories), Jasta 10, late 1917. The other three schemes are Lt. Alois Heldmann (15 victories), Jasta 10 serial # 1395/17, 1917., on the cover of the box is Lt. Emil Thuy (35 victories), Jasta 28, serial # 4017/17, 1917, the last one was flown Lt. Alfred Lenz, Jasta 22, serial # 1386/17, February 1918. The painting of the aircraft is good. The pieces for the kit fit well for the most part even though putting the engine in the cowling is a rather tight fit. I have no issues with the decals whatsoever even though I accidentally put on painters on one of the tiny decals. It got stuck and there was nothing I can do about it. So I had to paint a thin black line on where the ruined decal was. The cons of this kit are as follows: The color painting guide illustrations are in poor quality black and white. This is especially true if youâ€™re trying to do Lt. Alois Heldmannâ€™s plane. You wouldnâ€™t have a clue as to where to place your decals on the left side of the aircraft since itâ€™s basically hard to see. There are also not enough views of angles in the color painting guide illustrations. In conclusion, I give this kit a rating of 4.5 stars out of 5! Roden if youâ€™re reading this I highly recommend that your illustrations be in color as well as add more views on your future kits. Other than that in my mind, it is one of better kits Iâ€™ve seen from them in a while. I highly recommend this one into your WW1 collection.

#110 in Plastic Model Airplanes 1/70-1/79 Scale
#277 in Plastic Model Airplanes
#2,104 in Plastic Models
"Some works needed, but this Pfalz is excellent"
hhpodesta
This Pfalz kit made by roden, it's a very fine one. It's well molded, bu it's true that the kit has a lot of flash around the parts and will need some cleanup. The instructions are quite nicely done, with lots of drawings and a rigging diagram. Decal options for three variants. On closer look the wings and struts are very thin and the wings have excellent under camber detail. The engine is excellent and would lend itself to an open cowling diorama to fully display its detail. It's not a kit for beginners, especially in the assemble process, but i'm no pro at all, and it was a fun thing to build. I'm very pleased with the final looks of the model finished.

Keep small parts and sharp edges away from children Care should be taken when using tools and modeling knives Modeling paint should only be used by an adult in a well-ventilated area.