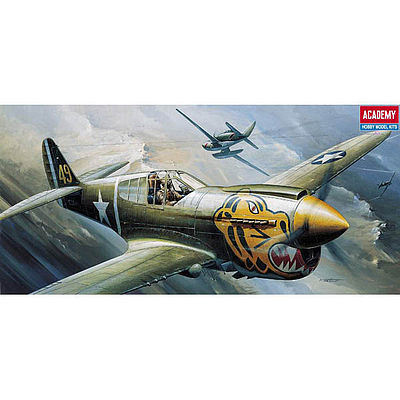 "Great Kit in every way"
Jansson2004 (New England)
this kit was incredible. all of the pieces fit beautifully. I had no issues with fit or problems with the instructions. it was easy to paint and it was a quick build. the only issue I had was the large nose decal was difficult to fit. other than that, flawless.

#116 in Plastic Model Airplanes 1/70-1/79 Scale
#297 in Plastic Model Airplanes
#1,751 in Plastic Models
"Great little Warhawk"
kajoe55 (Oklahoma)
I normally like to work in 1/48th scale but my wife purchased this kit for me and I was very pleased. Academy did a great job with this effort as the fit was fantastic. The cockpit is not accurate but gives enough detail in 1/72 scale and you could work to make it better. Panel lines are nice and the final product really looks good. As mentioned, the most impressive attribute of this model is the fit. It could almost be a snap together kit as the vertical stablizers line up easily, the fuselage fits very closely to the main wings (no filling), and the landing gears are strong enough to support the model. I did have a slight problem with the tail gear but it was fixed quickly. Just a general note: When working with the very small parts I would highly encourage you have a mat underneath you. Dropping parts into a carpet can ruin your day. I completed this kit in about 10 hours and its extremely easy to put together and to make it look good. Highly recommended for new modelers or those just getting back into the hobby. Have fun.
"Great Model for the Price"
pjsf14
Fairly easy model to assembly. I choose to use the decals for the one with the big tigers on the front. Recommend placing them before putting the prop and exhaust stacks on. I choose to model this plane inflight so I built the gear retracted. No instructions on how to do this included but it's pretty easy to figure out. FYI, this kit does not include any pilot figures. The trees also include a lot of parts that aren't used (extra windows and fairings). This was my first attempt at weathering a model and it was a nice simple kit to try it out on.
"Great model"
kennethlinger (Raleigh, NC)
I built this model with some Eduard photo etch and masking kit extras. What a fun build. I'm thinking of buying another one using some after market decals from cartogragh. Academy's decals sometimes will not activate on decal setting solutions.

The Curtiss P-40 was the only USAAF fighter available in quantity when the US entered WWII in 1941. By that time, the aircraft was almost obsolete compared to its adversaries but soldiered on throughout the war as various improvements were made in its design. The P-40E gained fame through its use by Gen Claire Chennault's Flying Tigers in China but the aircraft also saw service across the globe from Alaska to N. Africa.