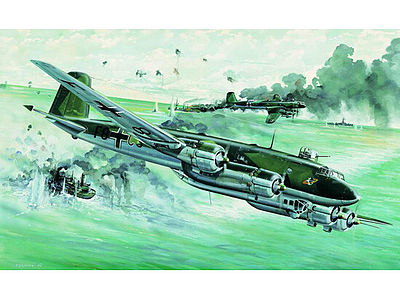 "The Maritime Scourge"
abbattior199091
I was thrilled to learn that there was finally an injection molded kit in 1/48th scale of the Kondor. I built a vacuformed model in the 80's but it proved fragile and was destroyed after a couple of duty station transfers. The kit is nicely molded with almost no flash and has good level of detail but there are some things that need to be addressed to make it accurate and strong enough to be handled. The wing needs a spar to keep it from flexing. Nautilus Models makes a wooden bracing set for this model that strengthens the center fuselage and inner wing sections but a styrene or brass spar works just as well. The most glaring error on this kit is the large elevator mass balances. They are backwards and incorrectly shaped. They should be attached to the elevators not the horizontal stabilizers and the side profile is too small. The outer wing panels were fabric covered on the real aircraft and I added this to my model with thin strips of plastic and thick primer. I used the newer 1/72nd scale Revell Fw200C4/8 kit issued in 2007 as a guide for these corrections. The rest of the model was built as per the kit instructions and I had no fit issues even with the aftermarket brace. I sealed the bomb bay since there's not a whole lot to see anyway. I would like to see this re-issued as a C8 version with the radar aerials on the nose and the bomb recesses on the outer nacelles covered over. It is a tremendous improvement over the vacuform kit of 30+ years ago and I would like to see more German heavy bombers like the Ju290 make into molded plastic.

#152 in Plastic Model Airplanes 1/40-1/49 Scale
#424 in Plastic Model Airplanes
#2,506 in Plastic Models
"excellent in all respects worth the price"
jctoymaker
The only worry I had about the kit is that I might mess it up! A very detailed to the point of frustration that most of it is sealed up, never to be seen again, like a very expensive casket! It requires an experienced and practiced hands; not for beginners for sure;it pushed me to the limits of my shrinking abilities. It made me think about the real aircraft in ways different from what I thought before; it certainly showed itself as a great maritime hunter; all those gas tanks! (it could have been a New York bomber if was able to carry a bombload, with all those tanks. In any event, one of the best model aircraft I have built in 64 years of building, period.
"Very nice kit with excellent details."
davezz4 (Schaumburg, IL)
This is an excellent model of the FW-200C4 Condor. Trumpeter did an excellent job. The interior detailing is very good. The only area lacking details is the gondola and bomb bay on the bottom. It would have been nice to have the bomb bay open. The model itself has a very good for fit. I only needed to fill in minor areas at the wing root. The instructions are easy to follow and laid out well. The decals were very nice. They are not too thick and went on easy. The only other thing that will be required is to make a wing spar to aid in supporting the wings better. I used square stock styrene to add a spar for the added support. I would recommend this item.

The Fw200 was designed in 1936 as an airliner for Lufthansa. It was of a low-winged, mainly all-metal construction &#188First flight was July 1937. Although originally a commercial aircraft, converted to military use, it was as a maritime patrol bomber that the Fw200C-3/4 Condor made its mark during the Second World War. In this capacity, acting in co-operation with U-boat packs, it formed one of the most effective Luftwaffe combinations of the war, and many a convoy was to rue the moment it first spied a Condor above the horizon. Meantime, the airline Fw 200Bs and the few pre production C-0s were pressed into service as transports. Production continued until early I944 through sub types C-1, -2, -3, -4 and -6, a total of 263 Condors of all versions being built. Towards the end of the war, when the Fw 200 marauding tactics had been largely mitigated, several Condors were diverted to transport duties for the use of Hitler and his staff. A projected development, the Fw 300, with enlarged wing span and inline engines of greater power, did not progress beyond the design stage. Type: Fw 200C-4 Function: Maritime Reconnaissance Engines: Four 1000hp BMW 323R-2 radials Armament: MG 15 7.9mm machine guns 5 MG FF 20mm cannon 1 Span: 32.84m Length: 23.85m Height: 6.30m Empty weight: 17005kg Max. weight½kg Max. speed: 224mph Service ceiling: 28700ft Range: 3950 miles