This is a plastic model kit of a 1/48 Russian KV-1 Heavy Tank by Tamiya. 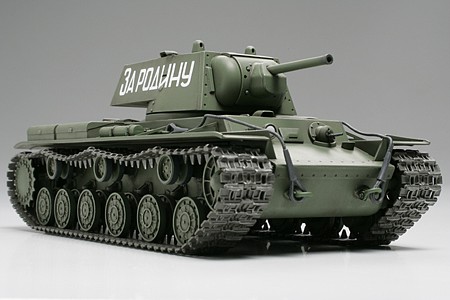 The unique and powerful form of this tank has been accurately replicated.

Recommended for use with Item 32521 1/48 WWII Russian Infantry and Tank Crew Set.

The largest, most heavily armored tank of its time when introduced, the KV-1 heavy tank played a major role in the defense of Russia in WWII. This assembly kit depicts a 1940 model type, never before modeled in 1/35 scale and therefore a 1/48 MM Series original. Model accurately reproduces the KV-176.2mm main gun and square-shaped welded turret. Use with Russian Infantry and Tank Crew Set to display Soviet forces on the move, or set against arch-rival, the German Tiger I.

When first introduced in late 1930's, the KVI was no doubt one of the most powerful tanks in the world, and a complete secret. It was built to be completely "bulletproof", and was shot proof against 37 or 50mm Anti-Tank Guns with it's thick 100mm armor. This heavy tank, weighing around 45 tons with crew of five, was armed with 76.2mm main gun and two MGs. The armament was considered heavy for 1940, but by 1943 the main gun lacked punching power against new Panthers and Tigers. Although production of the KV-1 series ended in July 1941, the tank was active throughout the conflict, and the basic ideas were later incorporated in modern tanks of the Soviet Union and other nations.