This is a 1/32 scale Sukhoi Su27 Flanker B Fighter plastic model airplane. 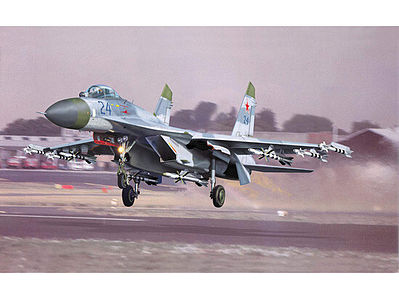 The Su-27 is a long-range air superiority fighter comparable to the US F-15 in size and mission. Su-27 entered production in 1982 and is in service with Russia, Ukraine, Belarus, Kazakhstan and Vietnam, and is built under license in China as the F-11. The Su-27 is equipped with an analog fly-by-wire control system, powerful pulse-Doppler radar, and up to ten air-to-air missiles giving it a potent look-down shoot-down capability. The Flanker also features rearward-facing radar at the end of a long boom placed between the engines allowing the Su-27 to fire at targets behind the aircraft. The Su-27's high thrust-to-weight ratio and refined aerodynamics allow superb flight characteristics at high angles of attack. In addition, the Soviet Navy purchased an improved Su-27K design, later redesignated the Su-33, to operate off its first class of large aircraft carriers. An interesting feature of the Su-27 is its autopilot, which is able to return the aircraft to right-side-up level flight at any altitude when the pilot presses a "panic-button." Besides the Su-33, the basic Su-27 airframe has also been developed into the Su-30, Su-35 and Su-37 fighters as well as the Su-34 bomber.