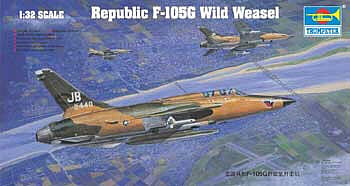 "Great kit not for beginners"
bigmac1959 (Sparks,Nv)
If you want to build this kit you need have some background building kits there is a lot of detail this kit also would recommend buying after market landing gear the plastic ones are a little flimsy for weight of kit

The F-105G was the designation given to Wild Weasel. F-105Fs which were fitted with greatly improved avionics. The designation EF-105F was temporarily applied to these aircraft, but their designation was eventually changed to F-105G. The F-105G was fitted with the AN/APR-35, AN/APR-36, AN/APR-37, and AN/ALR-31 Radar Homing and Warning (RHAW) systems. Installation of the AN/ALR-31 required that the wingtips be redesigned, in which a pair of antennas took the place of the navigational lights, which were moved to the leading edge of the wingtip. In addition, the Itek APR-36 radar homing and warning system of Wild Weasel F-105Fs was replaced by the Itek Radar Direction Finding and Homing system, and the Bendix APS-107 target acquisition set was installed. The F-105G also carried extra sensing antennae on the nose. Among these were four triangular-shaped antennae located on the nose just behind the main radome. Most F-105Gs were fitted with a combat camera mounted in a protrusion fitted underneath the nose just behind the radome. The first F-105Gs went to the 357th TFS of the 355th TFW based at Tahkli RTAFB during the second half of 1967. The 12th Tactical Fighter squadron of the 18th Tactical Fighter Wing, which had been detached to Korat RTAFB from Okinawa, was also equipped with the F-105G. Also provided with the G was the 17th WWS and the 6010th WWS (Ex 1th TFS Detachment 1), both from the 388th TFW based at Korat RTAFB. Unlike the single-seat F-105Ds which had been withdrawn from Southeast Asia in 1970, the F-105Gs remained in Vietnam until the end of US involvement in that conflict. Following the US withdrawal from Vietnam, two F-105G squadrons (the 561st and 562nd) served with TAC's 35th TFW at George AFB until they were replaced by F-4Gs in 1980. This marked the end of Thunderchief service with the USAF. The surviving F-105Gs were passed on to the 128th TFW of the Georgia Air National Guard, which operated them until 1983.