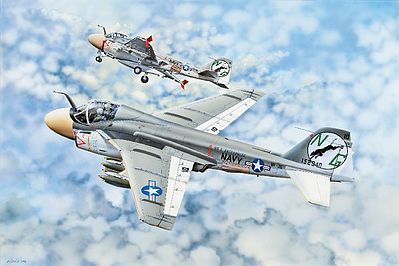 "Trumpeter A-6A"
scott (Tucson)
Having waited some years for Trumpeter to release this kit, then having both the A-6A and A-6E sitting in the stash for a couple of years, I finally pop the box on the 'A' and started building her. She's a BIG girl! and has loads of options as to displaying her which I'm trying to decide on. Both engines can be displayed with the engine panels open. One can choose flap/slats, wingtip speed brakes, fuselage speed brakes, radome or the birdcage open or closed. The cockpit and seats really looks good but the raised instrument panel details are not as noticeable has they should be, I have the Avionix cockpit set and one can easily see the differences although I can easily do without the detail set for both are a close match. The seats comes with a simple PE set for the belts, there's PE for the engine inlet and turbine fans and boarding ladders. The weapons that are included would put a smile on any aviation ordnance man, one thing that the Intruder can carry is bombs.....lots of them too! And the model has a good selection to choose from. The decal sheet depicts 2 Navy birds though the word walkway is misspelled, the sheet spelled it out 'kalkray' AOA decals has a A-6A data decal sheets which can fix that issue. They also have some excellent Marine/Navy squadron sheets on hand too. I bought their 'Marines on the beach' set which is outstanding. Overall I give Trumpeter high marks for producing this kit and I would recommend it to modelers with intermediate skills. I'm looking at picking up another 'A' to add to a diorama ideal I have in mind. Now I would like to see Trumpeter come out with the EA-6A and EA-6B. Scott USMC Ret. VMA-242 VMFA-AW-242

The Grumman A-6 Intruder was designed as the replacement of the A-1 Skyraider.It's the first all-weather attack aircraft of the US Navy.The aircraft were called as the A2F before 1962 and got the new name,the A-6 Intruder,in service.The outstanding all-weather capability soon made the A-6 the main strike force of the Navy and Marines,and devoted into the Vietnam War.

The A-6A were equipped with the DIANE system,which the most advanced navigation/targeting system at that time.But the problems of the reliability were solved after few years.There are 480 A-6As were built and 47of them were upgrade to other type.

Due to many small parts that could become a choking hazard, pleas keep away from children 3 years of age and younger.