This is the 1/32 Scale A-10A Thunderbolt II Plastic Model Kit from Trumpeter. Suitable for Ages 14 & Older. 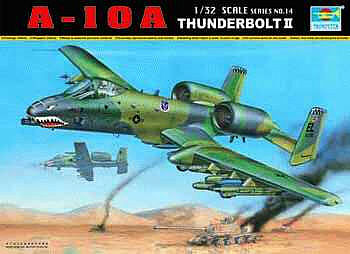 "great kit"
bigmac1959 (Sparks,Nv)
Great details some of them will not be seen unless built and left out of plane like gun and engines

#9 in Plastic Model Airplanes 1/30-1/39 Scale
#112 in Plastic Model Airplanes
#877 in Plastic Models
"1/32 A10A Thunderbolt II Single-Seat Fighter by Trumpeter"
CaptainA (Indiana)
I recently picked up this model. The box is big and there is a lot in it. The contents are very well packed in plastic bags, and the Trumpeter box that holds the delicate and loose parts. My model also has two resin engines, white metal landing gear, a resin pilotsâ€™ seat, a string to build wheel chocks, and rubber tires. There are 12 bags that contain 16 gray sprues, Photo-3etched parts, and 3 clear sprues, including clear engine shroud parts to show off the resign engines. The instruction manual has 28 pages. The box art shows exactly how the â€œWarthogâ€ will look when completed, top and bottom. This is a new boxing of an older Trumpeter kit with a trademark date of 2019. It has beautifully engraved panel lines and should build up nicely as these big Trumpeter kits do. It has 4 ordinance load examples to display its ability to carry a lot of ordinance. And a lot of ordinance is included in the kit, including the very prominent 30mm GAU-8/A Avenger gun Which looks to be a kit by itself. It has decals for Two aircraft. From a first look perspective, I would highly recommend this kit. Younger modelers will need supervision.

The A-10, a USAF product of the Cold War, was designed and deployed in the late 1970s to fight against the Warsaw Pact Forces in Central Europe. Instead, it saw actual action under Operation Desert Storm in the Persian Gulf in 1991.Subsequently, it saw action again in both Bosnia and later in Kosovo. In all these actual combat situations, the A-10 vindicated the objectives of its designers. Depicted in this box it an accurate replica of the actual aircraft with many details