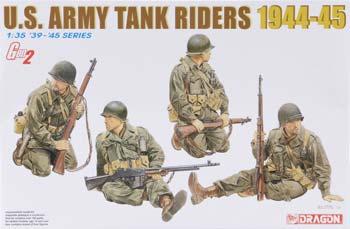 "Ride into Battle"
johncpo41 (www.hobbiesinabarn)
This set of four figures is a wonderful addition for any tank scene as I used them in my scene of the Battle of the Bulge. The figures shown are three of the four in the set and somewhat modified for a more accurate pose, however if they were built out of the box they would compare to other DML sets with lots of action poses. The figures went together well with few fit and excess plastic problems. The uniforms are of the later WW2 issue as they would match up to most any late war scene. I researched the equipment used by the troops around Bastonge' and noted that few were really equipped. This set would represent a unit totally unprepared for that battle.