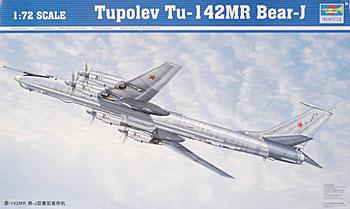 "Good, but not perfect"
jjczbrat
This kit has some very nice detail, but it is limited by the fact that it was molded such that options to build variants of the basic Ty-142 are not possible, and the leading edges of the wings are too blunt and clubby. The wings do droop nicely at the tips and overall, it looks like a maritime Bear.

TU-142MR BEAR J - -- The TU-142MR was a further modification of the Tu-142M The prototype Tu-142MR 'Bear-J' was based on the airframe of the Tu-142MK, and used for submarine communication relay, allowing national command authorities and strategic missile-carrying submarines to communicate. The under fuselage search radar has been removed, and the aircraft is equipped with an under fuselage winch pod for a several kilometer long trailing wire antenna. It has a communications antenna in a spike fairing that project forward from the fin tip, and a trailing wire antenna (and associated winch package) located below the belly. Production Tu-142MRs are more like the Tu-142M-Z, with an under nose sensor package and ECM system antennas underneath the rear fuselage. Unlike all the other maritime 'Bears,' the production Tu-142MR has a solid radome in place of the usual nose glazing where a limited-range search/weather radar is probably housed to compensate for the lack of a Korshun system. Only a small number of Tu-142MRs were produced, and the prototype was delivered to the 76th Regiment along with early production aircraft.