This is a 1/72 scale Ilyushin IL28 Beagle plastic model airplane. 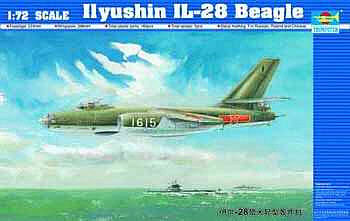 "Best 1/72 of the Beagle"
John64reed
This kit is far superior to the old worn out Airfix kit. The price is right and options for bombs are great

#83 in Plastic Model Airplanes 1/70-1/79 Scale
#212 in Plastic Model Airplanes
#1,526 in Plastic Models
"Great kit"
tommeeks
Unusual to find an aircraft of this size at this low of a price. The parts went together very cleanly leaving few gaps that needed putty. Was very happy with the kit and the results. Would strongly recommend this to any one interested in the aircraft
"Great"
Sunny407
Big airplane fits very well nice detailed very low price... Perfect...That's it
"The best kit I've gotten for the price"
infantjones (Arizona)
Around the time I bought this kit, I got a few others for around the same price (within a dollar or so) and the Trumpeter Il-28 was by a decent margin the best kit of them, it's well detailed, there isn't much of an issue with ill-fitting parts, and there were very few issues with breakages. Absolutely recommend it, especially considering the price of other jet bombers.

Ilyushin il-28 Beagle (Russia) Tachical jet bomber, the first Soviet jet bomber to enter service in large numbers. First flown on the 8th August 1948, the IL-28 entered service with V-VS bomber squadrons in 1950 and remained in service for three decades with the Soviet Air Force and Nay. It was a fairly orthodox design with a straight wing, swept tail surfaces, and two big underwing engines. The tail turret was unusual for an aircraft this size, but was considered much more efficient than a dorsal turret. It was a successful type that was exported to over 20 countries, and also served as reconnaissance aircraft, torpedo bomber, target tug, anti-submarine aircraft, and target drone. About 2000 were built. Now last 5 Soviet-built IL-28's may be still in service with Egypt, but some 650 Chinese Hong-5 are in service with China, N.Korea and Romania.