This is the 1/72 Scale MiG-37B Ferret Plastic Model Airplane Kit from Italeri. Suitable for Ages 14 & Up. 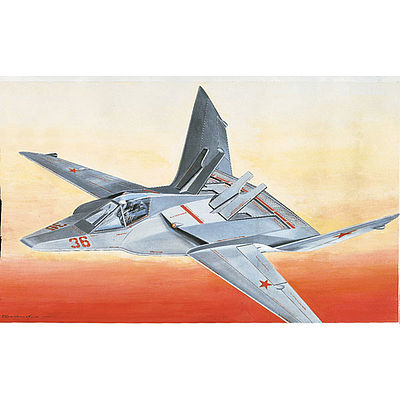 "A what if... but actually more accurate than we could ever thought!"
jclemente1980 (Coimbra, Portugal)
This is a what if, a fake russian prototype... Its a strange looking airplane, a nice kit that needs some extra weight on the front, but that builds up very easyally. Nice to start on, nice to do camouflage tests on, to try mods, whatever. A nice one! Fake... but nice one!

While no Soviet or Russian equivalent to the US F-117A Stealth Fighter is known to exist, this model is a conception of what such an aircraft might look like. The model has been designed from extensive research into the capabilities of the Soviet aircraft industry, as well as Western publications on the Soviet defense industry. As conceptualized, the MiG-37B would have a similar mission profile and capabilities to its U.S. counterpart, the F-117A.