This is a 1/72 scale RA-5C VIGILANTE plastic model airplane. 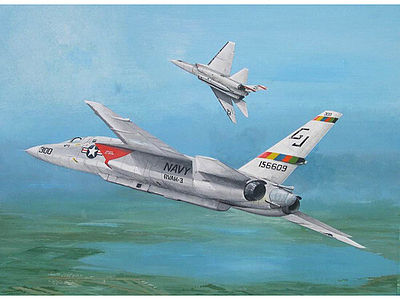 The RA-5C was a photographic reconnaissance adaptation of the Vigilante. It incorporated most of the changes that had been introduced with the A-5B, including the hump-backed fuselage with the extra fuel, the larger wing area, the blown flaps on the leading edge, and the four underwing hardpoints. Four external droptanks could be carried underneath the wings, although these were seldom carried because there was ample fuel capacity within the fuselage itself. It was decided that earlier (now redundant) A-5As would be remanufactured to RA-5C standards, so the initial production of the RA-5C was restricted to only 43 planes. Of the 59 A-5As built, 43 were eventually reconfigured to RA-5Cs. In addition, all 18 of the A-5Bs that were ordered were delivered as RA-5Cs. The first RA-5C was delivered on December 10, 1963. During the Vietnam War, the Navy requested additional RA-5Cs, and the production line at North American-Columbus had to be reopened. 36 additional RA-5Cs were built, all of them manufactured with the 17,900 lb.s.t. J79-GE-10 engine. Most RA-5Cs were painted with the standard Navy insignia white and gull gray scheme.