This is the 1/72 Scale C-47 Skytrain Plastic Model Airplane Kit from Italeri. Suitable for Ages 14 & Up. 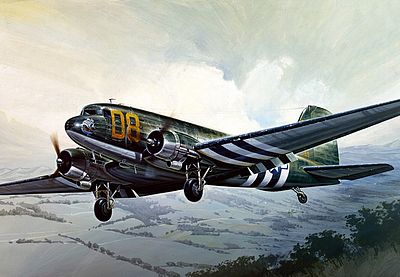 "Very nice older kit, good build, the detail is not up to today's standards"
rarem37
This kit builds up well, but it is not up to the standards of today's new molds. The gaps and joins need sanding to get smooth. This kit has been issued in a number of different versions including a gunship. They all have one thing in common; you must use a great deal of car when installing the cockpit glass. It is a very tight fit and if you try to force it; it will break!

#23 in Plastic Model Airplanes 1/70-1/79 Scale
#70 in Plastic Model Airplanes
#676 in Plastic Models
"C-47 Skytrain model"
ehsilly
Pretty easy to build, good instructions for 12yr old and up.Good fit with pieces except for wings; gaps(putty needed). Aircraft easy to paint and decals go on well. Displays very good with other WWII 1/72 scale aircraft. Some call this plane a Gooney Bird.
"Very nice kit"
tom55wood
This was an easy build, would recommend it for everyone.
"OK, but want to try the new Airfix now"
Achu001
Just finished putting the decals on this kit. The mould was pretty good, but some fit issues arose. The wing gaps were very different sizes on wither side, which took substantial time to get back to just acceptable. Panel lines are recessed, but are very very thin, especially the ribs along the horizontal stab. The worst spot for fit was where the windshield met the fuselage, and the area was generally weak. Be careful there. Interested to see if the new Airfix is any better.

The DC-3 is one of the most famous aircraft in the history of aviation. Its introduction in the 1930's revolutionised air travel and made it possible for even the average person to afford to fly. When WWII began in 1939, the DC-3 was quickly adapted for military use and pressed into service as the C-47, also known as the Skytrain. The C-47 was used by all the Allied nations during the war and continued in service long afterward. Eventually, some C-47's were even converted to heavily armed gunships and used in Vietnam.