This is a plastic model kit of a 1/48 Scale Douglas Skyraider AD-6 Attack Aircraft by Tamiya. 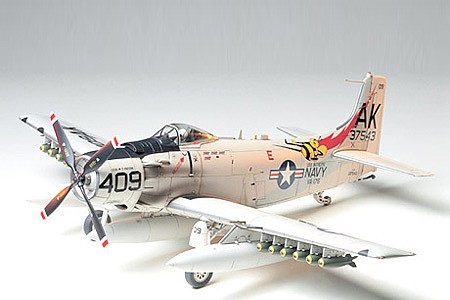 "Douglas Skyraider AD-6"
crj7001966 (Detroit MI)
Tamiya has a bunch of great kits, but this one has to be in the top 10. It goes together great and looks the part of the flying dump truck right to a tee. It comes with a bunch of weapons to hang under it and the decals were perfect.

#25 in Plastic Model Airplanes 1/40-1/49 Scale
#59 in Plastic Model Airplanes
#510 in Plastic Models
"Korea and Vietnam Hero of the Air"
johncpo41 (www.hobbiesinabarn)
Too late to see action in World War Two this aircraft was loved by pilots and ground troops alike. Close air support was the key to any fighting in either war and pilot rescue even a larger part of the role of the plane. Flown by Senior enlisted as well as Commissioned Officers the duties never faltered. Flying in pairs or in groups, the enemy in either war did not want to deal with the plane as it would come down to ground level to bring the fight to the ground. My model represents the Korean War version and with the Navy Blue as the signature color scheme back then I used a craft type acrylic glossy blue. The kit is an easy build with little or no problems and would be a great starter kit for anyone. Some fit issues exist but can be taken care of. The Vietnam version tail decal of the stinging bee is a bit intimidating for beginners so be careful when applying it. This is a great addition to any collection.
"Nice model to build!"
fbbrown (Fort Mohave, Arizona)
This was a wonderful model to do. All the pieces fit together very well with little or no trimming. I wouldn't say this was a model for a young inexperienced modeler to do if you want it to come out really nice. I made mine from the U.S. Midway aircraft carrier which is a museum in San Diego, California. I have been on the aircraft carrier and seen the actual aircraft that this model portrays, which is one of three versions that this kit includes. Always a pleasure to build models from Tamiya.
"awesome"
jay.yates
i like to do the planes cause then i can add the motor so that the prop spins, over all this is a fun and exciting model to do

During 1943 the U.S. Bureau of Aeronautics considered to combine the tasks of torpedo bomber and dive-bomber into one. Several aircraft manufacturers, such as Douglas and Martin, were requested to develop a large, single-seat attack aircraft. According to the requirement, Douglas Skyraider, was developed by Douglas Aircraft Company, Inc.

The development was started in early July 1944, and all night efforts of engineers made the first prototype's first flight possible already on March 18, 1945. Despite the short period of the development, flight trials proved the airframe's flight characteristics satisfactory and the aircraft was rated very highly. In May 1945 a letter of intent for 598 production was signed. The name "Skyraider" was officially approved for the aircraft in February of the following year, and the distribution to units was started at the end of the same year. The Skyraider was powered by Wright R3350 radial engine yielding 2,800 horse power and equipped with three large dive brakes on the fuselage.

The Skyraider had a number of types, from the AD-1 to AD-7, recording grand total number of production of more than 3,000. Among them, AD-6 was the most produced variant. The AD designation for the Skyraider was changed in 1962, and the AD-6 became the A-1H. Noted for its durability and a large capacity for external stores, the Skyraider was well liked by its pilots and crewmen.