This is a 1/72 scale BRITISH WYVERN S4 plastic model airplane. 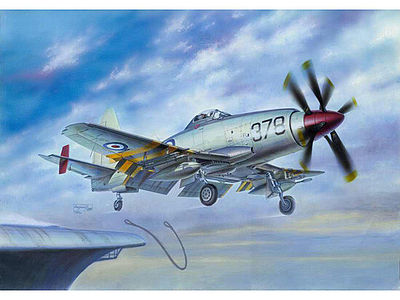 The Wyvern prototype was first flown in 1946, and was found to have a very respectable performance with a top speed of 456 mph, despite being considerably heavier than a DC3 transport plane. Unfortunately the teething problems which were the bane of the Wyverns existence began to manifest themselves, arising from the enormous engine and propellor overhang causing bending of the propellor shaft and associated problems. At about this time the British Government ordered Rolls Royce to abandon development of the Eagle to concentrate on gas turbine development, and as as result the Wyvern became an airframe in search of an engine. The Python was an older design and lower-powered (3760 hp), with a 14-stage axial compressor. The first Python-engined Wyvern TF.2 was VP109 and flew on 22 March 1949, and twenty Python-engined TF.2s were built. Carrier trials began on 21 June 1950. Four converted and 87 new-built aircraft were delivered of the most important Wyvern version, the TF.4, later renamed S.4. The TF.4 had numerous small changes. The recognition characteristic was the cut-off engine inlet, the propeller spinner then protruding much further forward. Small rectangular fins were added to the tailplane, changes were made to the ailerons, Martin-Baker Mk. 2B ejection seats were installed, and the cockpit was reinforced. Later modifications included perforated dive brakes, a flat windscreen, and provisions for tip tanks. The Wyvern entered service with 813 Sqn in May 1953, replacing the Firebrand. 813 Sqn was based later on the Eagle and the Albion. Other Wyvern units were 827, 830 and 831. In November 1956 the 830 and 831 Squadron took part in the Suez campaign. Only 830 seems to have made combat flights, losing 2 aircraft in 79 sorties. In March 1958 the last Wyvern unit, 813, was disbanded. Total Wyvern production had been 127