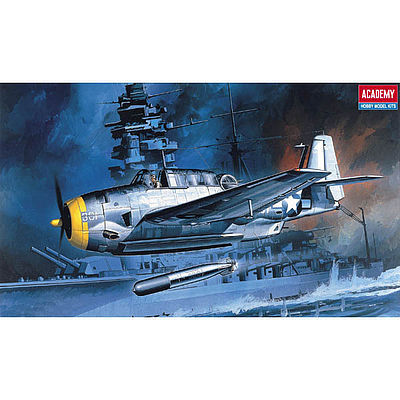 "Nice Kit by Academy"
sboreczky
Academy makes good, basic kits and this TBF1 kit is no different. Clear instructions, good fit and even includes a pilot figure. It is an easy build and no complicated small detail pieces that would probably not be seen anyway. I added a second crew figure that I had in my miscellaneous parts box. You really cannot go wrong with this model. Well worth the price.

#9 in Plastic Model Airplanes 1/70-1/79 Scale
#25 in Plastic Model Airplanes
#193 in Plastic Models
"Simple build decent quality"
albertforster
For the money, this wasn't a bad kit. Everything seemed to fit well and for a 1/72 the level of exterior detail made a decent looking kit. Really wasn't complicated, cowl and engine were one piece, bombbay doors were molded as part of the fuselage, wings are non folding, and the landing gear seemed a bit simplistic. No bells or whistles here. Overall makes a nice looking model for the money.
"Lacking in research, but ok kit."
rovert815
This kit is typical of Academy. Simple molding, ok fit, lacking in decals, and a bit of confusion in their research. This kit if built straight from the box actually represents the British variant, and the included decals are for a paint scheme from a TBF-3. To do the kit right, it requires some careful modification and scratchbuilding as well as sourcing of decals. However, for a quick simple build or for someone first starting out, its a great cheap kit to get the basics of kitbuilding down.
"Not perfect, but..."
exogen
Not perfect, but the only game in town in this scale. Fit is good. Detail is average. Some inaccuracies. But it looks nice hanging. Gear up option. Excellent relief on canopy rails for painting. Only one choice of markings. I did mine in aftermarket decals for a Midway TBF. Recommend. But it could be better.

The TBF-1 Avenger was available in sufficient numbers to be present for the outbreak of WWII despite the fact that it only made its first flight on 1 August 1941. The Avenger was especially popular because it could carry a full size submarine torpedo. This requires a weapons bay capable of carrying up to 2,000 pounds of bombs or other weapons. The Avenger also carried more defensive armament than many craft. The Avenger remained in use both during and after World War II.