This is the 1/35 Scale US Tank Destroyer M10 Mid Production from Tamiya. 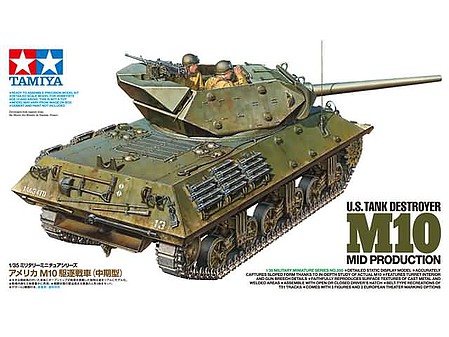 This is a model of the famed M10 Tank Destroyer, a subject also covered in the 1/48 scale Military Miniature series. This largely newly-tooled model (only machine gun and clear parts are taken over from existing models) gives it the glorious detail of the larger 1/35 scale. The astonishing success of German armor tactics in 1940 prompted U.S. forces to adopt a doctrine requiring dedicated new tank destroyers to counter them. After going down a few different design routes at the start of the process, they eventually hit upon the highly successful M10 design with well-sloped (if rather thin, to keep the vehicle light and maneuverable) armor plate, and the highly capable 3-inch (76.2mm) gun. Over 4,900 were produced, and took part in Operation Torch (the invasion of N. Africa), as well as fighting in Italy and the advance upon Germany that would bring the exhausting conflict to a close.

#57 in Plastic Model Military Vehicles
#104 in Plastic Model Cars / Trucks / Vehicles
#229 in Plastic Models
"M10 Packs a Punch"
snod
Tamiya has out done themselves again. I fell like it could jump off my work bench and roll down the road. Follow the instructions as per item to build next. This will make the building process go smoothly. PRO'S The detail is excellent. No fit problems. The interior detail is excellent, from the gun breach, tommy gun, turret gears, shell racks and shells. All the interior detail matches my reference book. The figures help make kit pop. It has a single piece gun barrel made of plastic. Two small cuts off the spruce, a little light sanding on those spots and it looks like it came off the production line. No spending more money on a metal barrel. Instruction sheet at each step tells you which pieces go on first if required. First time I have seen this and it was nice to have. The tracks are the single piece rubber. They look so good I did not spent the time on buying single links. Decals allow you to do two different tanks. Everything you need is inside the kit. CON'S None.
"Tamiya #35350 US Tank Destroyer M10"
1stevenhay.2861
This kit faithfully reproduces a mid production M10 with great detail.The crew figures are well animated and easily fit into the vehicle.
"Great American tank"
rbsurfer1@yahoo.com
Beautiful model nice to assemble would recommend it to anyone very easy to assemble